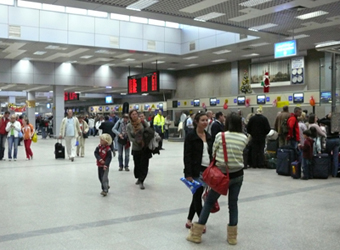 In a new development that reflects the return of the German tourism to Egypt, Hurghada International Airport  had received one thousand tourists from Germany during the past few hours, said the head of the Egyptian Airports Co. on Tuesday.

The chairman of the Egyptian Airports Company, Gad el-Karim Nasr noted that around one thousand tourists from Germany had arrived at Hurghada International Airport on Frankfurt-based Condor Airlines.

The split in the German tourism market over how to respond to the situation in Egypt and the German foreign ministry’s complex travel advice has deepened with the decision of Thomas Cook, DER Touristik and other Germany tour operators to resume departures to the country from next Monday (September 30) onwards.

Condor had 5 flights to Egypt over the past few hours, on board 200 German tourists, Mr. Nasr added.

About EAC:
EAC (Egyptian Airports Company) is subsidiary of EHCAAN (Egyptian Holding Company for Airports and Air Navigation) which is a public owned Company established in 2001.