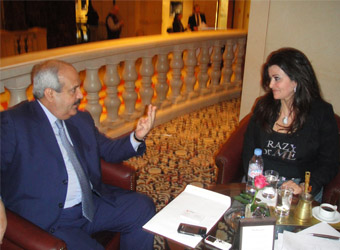 Union of Arab Banks (UAB) seemed to give more attention to small and medium enterprises (SMEs) through signing deals as part of the Union’s efforts towards forming a” Mediterranean Partnership Fund” to raise bankers’ awareness about the importance of financing and opening credit lines for this sector after performing required studies.

Adnan Youssef, chairman of UAB and CEO of Al Baraka Banking Group, affirmed in an interview with Amwal Al Ghad that SMEs are a key method in achieving sustainable economic growth and reducing unemployment rate. SMEs contributes in the advancement of many developed countries, he added.

The implications of Arab Spring uprisings on banks will be shown on the long term. However, there shall be consensus among political powers over the main principles to avoid the negative implications on banks as they consider the main engine for national economy. The absence of consensus will consume the country’s resources, which will in turn harm economy’s stability.

Transitions witnessed by the societies have negative implications on economy, but as political powers and elites work on reaching a common ground on the main principles as early as possible, this should affect the country’s economy in a positive way. The economy may post higher growth rates than before because of the new factors introduced in the market.

UAB can play an effective role in supporting Arab economies through organizing events that prove the economic stability of these countries and doing studies contributing in attracting foreign investments. UAB is currently working on many axes such as the Arab Common Market, encouraging cooperation among Arab banks and communicating with Arab chambers of commerce. There is continuous cooperation between UAB and Union of Arab Chambers in Lebanon and other regional financial institutions such as Arab Monetary Fund and Islamic Bank for Development.

UAB works on many axes such as launching “Arab Center for Excellence in Social Responsibility” initiative which issues standards and rules regulating the responsibilities of institutions regarding offering finances and products. UAB will cooperate with the concerned monitory bodies in the Arab countries to regulate and organize their work which will in turn create an integrated system for governing societal responsibilities.

As part of its efforts to launch “Mediterranean Partnership Fund” to finance micro, small and medium enterprises, UAB signed a deal with the Italian government and Italy-owned SIMEST Company to raise bankers’ awareness about the importance of financing SMEs through doing studies over the matter.

Adnan Youssef affirmed that Egyptian economists take the required measures for managing liquidity and are ready for implementing the best practices.
Despite the current challenges, there are many available choices such as issuing sukuk or any other issues in local or dollar currency. Youssef preferred the sukuk choice as it proved to be a success in Bahrain, Sudan and state of Lower Saxony in Germany.
However, Central Bank of Egypt is expected to choose suitable tools, in accordance with the market requirements for liquidity.

Youssef said Al Baraka Banking Group recorded excellent results despite the prevailing negative circumstances in the countries in which the Group exits. The Group was ranked the fifth largest Islamic bank by assets in the Arab Gulf countries. Al Baraka Group achieved the highest growth rate in net profit as it reached 10%, while the average growth rate of regional banks was 3%. The Group’s deposits posted 26.3% increase, exceeding that of the largest banks. In addition, Al Baraka Group has the most widespread branch network as it has 400 branches in more than 15 countries and employees are more than 9 thousand.

“This is my last term as a chairman of Union of Arab Banks, “Youssef said, but I will continue contributing in the benefit of Arab banks. There are many excellent Arab bankers, not affiliate to the union, who made it one of the most successful organizations.

Abdel Megid: An Integrated System For SMEs Is A Must