Around one in five S&P 500 firms have said China’s virulent coronavirus will impact their revenues or profits, underscoring the far-reaching toll the disease is set to take on businesses around the globe.

A CNBC analysis of over 180 earnings transcripts and other corporate releases since the beginning of 2020 indicated a high level of concern.

While most management teams that have warned of a revenue hit said they do not predict any impact to full-year figures, many expect a drag in the first quarter.

“Although it is difficult to anticipate the full impact of the coronavirus on our business, we expect the next couple of months will be very challenging,” said Estee Lauder, chief executive of Fabrizio Freda.

“Chinese consumers in many big cities are staying home and retailers are closing stores or limiting hours in an effort to help contain the spread of the virus.”

Royal Caribbean Cruises stated that earlier this month that precautionary cancellations are expected to cost the company 65 cents in full-year earnings per share.

“Unfortunately, no one knows how this outbreak will play out and we don’t know how it will ultimately impact us,” Richard Fain, the company’s chairman, said on February 4. “We also expect that there will be an impact on future bookings in China, especially in the immediate aftermath of the illness. But again, we just don’t know.”

Others, like Apple, said that they have issued broader-than-usual revenue ranges for the first quarter to account for the potential impact from the virus.

“Many of the stores that remain open have also reduced operating hours,” chief executive Tim Cook said in January. “We’re taking additional precautions and frequently deep cleaning our stores as well as conducting temperature checks for employees. While our sales within the Wuhan area itself are small, retail traffic has also been impacted outside of this area across the country in the last few days.”

Another sizable number of S&P executives whom CNBC did not count in its current tally said at the time of their earnings reports that it was too early to tell if the coronavirus would hit current-quarter finances but promised to keep stakeholders aware if the outlook changes in the weeks to come. Some other firms, such as McDonald’s, have confirmed location closures in China.

More comments may be yet to release. Three hundred ninety-two of the 500 S&P components have unveiled their fourth-quarter earnings as of Friday.

below is the current list of the companies that provided warnings. 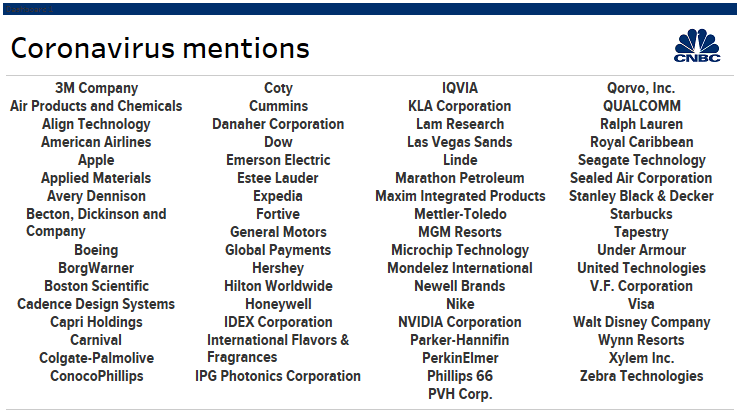 Google to restructure Cloud business, as some roles to be removed