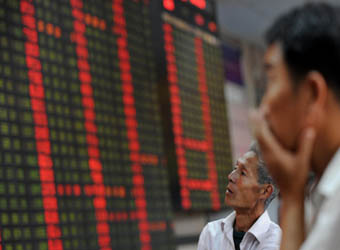 The Nikkei 225 shed 0.28 percent while the broader Topix was flat. Among sectors, insurers, banks and shippers traded in positive territory, while technology was a mixed bag.

Elsewhere, the Kospi was off by 0.19 percent, with automakers and retailers declining as steelmakers climbed. In Australia, the S&P/ASX 200 advanced 0.41 percent as the financials subindex and gold producers led gains on the index.

Hong Kong’s Hang Seng Index eased 0.36 percent as slight gains in financials were erased by losses in the technology sector.

The subdued performance in Asia followed declines in U.S. stock indexes on Friday amid a fall in Apple shares, which pushed the technology sector lower. Apple tumbled 4.1 percent following a Morgan Stanley note said iPhone sales in the June quarter would miss expectations.

Investors also had their eye on the strong showing seen stateside this earnings season, with 81.5 percent of S&P 500 companies reporting as of Friday better-than-expected earnings, according to FactSet. More than one third of S&P 500 companies are expected to report this week.

Also of note was the move higher in U.S. Treasury yields, which has in turn supported the dollar. The yield on the 10-year Treasury note stood at 2.977 percent in afternoon Asian trade after rising as high as 2.979 percent earlier, its highest level since January 2014.

“While the Fed’s tightening cycle would be expected to cause some flattening pressure, too much can put the brakes on as an inverted yield curve may suggest investors are losing confidence in the outlook, preferring to accept a lower yield for a longer duration than risk short term rates falling if the economy tanks,” said ANZ analysts in a morning note.

“As the Fed continues to lift its target rate, the curve is definitely one to keep an eye on.”

Meanwhile, U.S.-China trade tensions that had spooked markets earlier in the month also weren’t far from investors’ minds after U.S. Treasury Secretary Steven Mnuchin on Saturday said a trip to China was “under consideration.”

Asian stocks had ended the last session with moderate losses after technology shares in the region took a hit on the back of weak guidance from Taiwan Semiconductor Manufacturing (TSMC) on Thursday.

On the commodities front, oil prices were stable. U.S. West Texas Intermediate crude was mostly flat at $68.39 per barrel and Brent crude futures edged higher by 0.08 percent to $74.12.

On Friday, oil prices had initially slid on the back of President Donald Trump’s comments on Twitter that OPEC was keeping crude prices “artificially Very High,” before recovering and settling slightly higher.

Dollar near 2-week high as US bond yields edge up