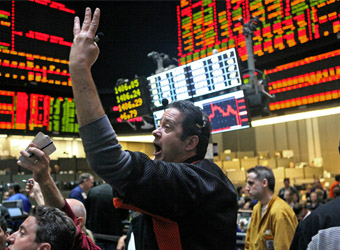 Stocks rose to their session highs after a CSPAN video from earlier in the month circulated on trading floors that some traders falsely interpreted as former FBI Director James Comey saying he was never pressured to end an FBI probe. In the video, however, Comey is answering a question specific to the U.S. Attorney General or “senior officials at the Department of Justice,” not Trump.

“You take obstruction out of the equation, then impeachment becomes moot,” said Andy Brenner, head of international fixed income securities at National Alliance Securities. “Hence risk on is running and vol is falling.”

The Dow Jones industrial average gained 140 points after a lower open, with UnitedHealth contributing the most gains. Cisco Systems, though, fell 7.3 percent after the company issued weak guidance.

“What happened yesterday was interesting. You had a complete removal of any Trump premium,” said Randy Warren, chief investment officer at Warren Financial. “What’s happening now is the fundamentals are taking over.”

U.S. equities suffered their worst day of the year Wednesday, with the Dow dropping 372 points, on the back of news that Comey put together a memo outlining a conversation in which Trump allegedly asked him to halt an investigation into former National Security adviser Michael Flynn.

“I think we just saw the market taking stock of itself,” said Arian Vojdani, investment strategist at MV Financial. “If the administration can keep a low profile, then investors who sell on headlines will calm down.”

Since the election, the S&P has gained about 10 percent with information technology and financials leading the way. But financials suffered their worst session since June 24 on Wednesday, falling 3 percent.

“This is going to linger because the surge in equities since the election was due to expectations of lower taxes and infrastructure spending,” said Komal Sri-Kumar, president of Sri-Kumar Global Strategies.

“The question now is whether the threat of an impeachment would be enough to change our current view of markets, and the answer right now is no,” said Michael Shaoul, chairman and CEO of Marketfield Asset Management, in a note Thursday.

“We have no way of knowing how much further this story has to run, but even if it turned into the sort of festering mess that bedeviled President Clinton and gripped the country’s attention between 1998 and 1999, it is not clear that this would interrupt either the economic cycle or the current bull market,” Shaoul said.

Treasurys staged their second-biggest rally of the year Wednesday, as expectations faded that Trump can get tax reform or fiscal stimulus through Congress this year, or maybe even next year.

In economic news, weekly jobless claims totaled 232,000, below the expected 240,000. Meanwhile, the Philadelphia Federal Reserve business index rose to 38.8 in May from 22.0 in April.

The S&P 500 gained 4 points, or 0.18 percent, to 2,361, with telecommunications leading 10 sectors higher and financials the only decliners.

Advancers and decliners were about even at the New York Stock Exchange, with an exchange volume of 385 million and a composite volume of 1.78 billion in midday trade.