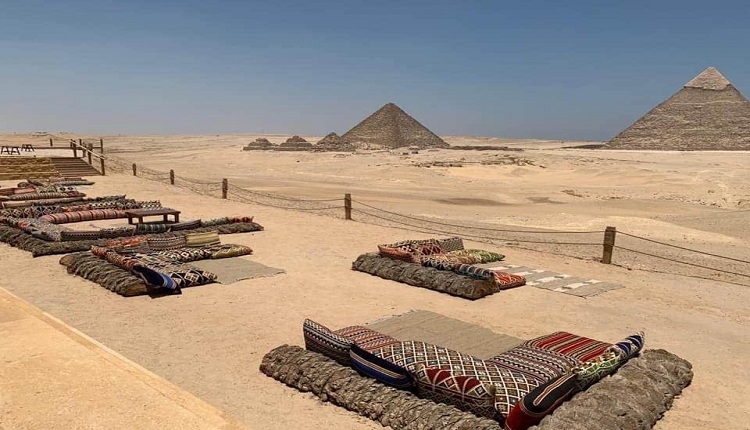 Named 9 Pyramids Lounge, the restaurant is established  on a total area of 1,341 square metres with indoor and outdoor seating along with a private parking lot nearby. The restaurant is built in a subtle wooden setting, with pillows scattered on the ground to emulate the Bedouin style.

The lounge was inaugurated during an event attended by Tourism and Antiquities Minister Khaled Al-Anany, chairman and CEO of Orascom Naguib Sawiris, CEO of Orascom Pyramids Entertainment Ashraf Halim, and others.

The project is  a fruitful joint cooperation between the Supreme Council and Antiquities and Egypt’s Orascom Pyramids Entrainment (OPT), which is a subsidiary of the Orascom Investment Holding (OIH) group.

Naguib Sawiris, Chairman and CEO of OIH, said his group’s main objective is upgrading services provided to the visitors of the pyramids while preserving the area from all forms of pollution as well as creating a fascinating experience for its visitors.

He revealed that two more restaurants and a cafe will be launched in early 2021 in an old building located on the northwestern side overlooking the three pyramids.

Netflix earnings jump 19 % in Q3 yet subscribers taper off