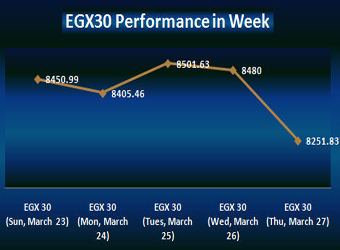 Egypt’s stock market made losses totalling 3 billion Egyptian pounds in a week which witnessed the country’s army chief declaring his presidential candidacy for the upcoming presidential elections. In return, the main stock index – EGX30 index retreated by 2.5% in a week.

Egypt’s chief army Abdel Fattah al-Sisi, the general who ended the one-year rule of Egypt’s first freely elected leader Mohamed Morsi following after mass protests against his rule, declared his candidacy on Wednesday for a presidential election he is expected to easily win.

Sisi toppled the Muslim Brotherhood-led leader last July after mass protests against his rule and has emerged as the most influential figure in an interim administration that has governed since then.

“I am here before you humbly stating my intention to run for the presidency of the Arab Republic of Egypt,” Sisi said in a televised address to the nation. “Only your support will grant me this great honor.”

A Sisi presidency would mark a return to the days when Egypt was led by men from the military, a pattern briefly interrupted by Morsi’s one year in office after his 2012 victory in Egypt’s first democratic presidential election.

Indices:
Back to the performance of the Egyptian Exchange’s indices throughout last week trading sessions, the EGX30 sank by 2.5% in a week, registering a decline of 207.56 points, ending Thursday’s transactions at 8251.83 points compared to 8459.39 points at the end of a week earlier.

The main gauge index registered its highest point on Tuesday closing at 8501.63 points, whereas its lowest point recorded on Thursday at 8251.83 points.

Furthermore, the market capitalization closed at EGP 487.442 billion last Thursday, compared to EGP 490.449 billion at the end of a week earlier.

Financial Services excluding Banks sector was the most active sector through last week, recording a volume of trades of 441 million securities worth EGP 1.5 billion.

Real Estate reported third, with a volume of trades of 166 million securities worth EGP 1.030 billion.

Personal and Household Products sector was on the fourth position, getting a volume of trades of 113 million securities worth EGP 499 million.

Industrial Goods and Services and Automobiles reported sixth, having a volume of trades of 92 million securities worth EGP 240 million.

Construction and Materials was on the seventh position, with a volume of trades of 50 million securities worth EGP 221 million.

Food and Beverage reported eighth, attaining a volume of trades of 27 million securities worth EGP 161 million.

Basic Resources took the ninth position, with a volume of trades of 24 million securities worth EGP 350 million.

At the bottom of the list, Healthcare and Pharmaceuticals sector reported twelfth getting a volume of trades of 7.4 million securities worth EGP 29.3 million.

Local investors led the market activity all through the week with 87.87%, followed by Foreign and Arab investors with 5.34% and  6.78%, respectively, after excluding the deals.

Foreign investors were the most active buyers during the week earning the value of 9.31 million, after excluding the deals.

Arab investors were also to buy by value of EGP 82.23 million, after excluding the deals.

Moreover, institutions seized 30.38% of total trading through the week; while individuals attained 69.62% . Institutions were the most active sellers during the week earning the value of EGP 174.32 million, after excluding the deals.

The EGX is unlikely to remove the remaining precautionary measures applied by the bourse since March 2011, said chairman Dr. Mohamed Omran on Tuesday.

“It is still early to think of taking such a move that should follow the completion of presidential and parliamentary elections,” Omran told state-owned agency MENA.

The top official added that most precautionary measures taken in March 2011 were ended, and what remains are the pre-opening session and price limits on indices and stocks, which will be cancelled following the political milestones.

The Chairman also indicated that EGX is regularly studying the market performance and movement and agreed with the market’s financial regulator, the Egyptian Financial Supervisory Authority (EFSA) to continue the precautionary steps during the current period.

The EGX board endorsed on Monday the executive regulations for ETFs, market maker, as well as rules for sizeable transactions on listed securities.

According to the bourse’s statement, the decisions will be submitted to the Egyptian Financial Supervisory Authority for endorsement.