May scraps £65 fee for EU citizens to stay in UK 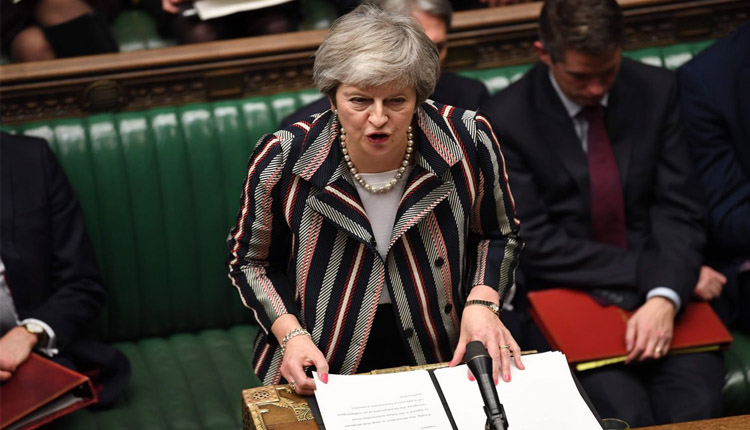 Theresa May has scrapped the £65 fee millions of EU citizens were going to have to pay to secure the right to continue living in the UK after Brexit.

She also vowed to seek changes to the Irish backstop from the EU.

But she again rejected calls to rule out a “no-deal” Brexit – and warned another EU referendum could threaten the UK’s “social cohesion”.

Conservative rebels and Labour accused her of being in denial about the scale of opposition to her Brexit deal.

Mrs May had been forced to make the statement setting out her plan for how to proceed after MPs rejected her Brexit deal with the EU by 230 votes last week – her “plan B”.

MPs are due to vote on a modified version of the deal next Tuesday, although she gave few details about how it would be changed.

Between now and then, MPs will table a series of amendments – proposed changes to the PM’s deal – in an attempt to force through alternatives to her Brexit deal. The Commons Speaker John Bercow will choose which amendments are put to a vote.

Mrs May promised to seek the views of Northern Ireland’s Democratic Unionist Party – who keep her minority government in power – and others on the proposed Irish backstop.

She said she would then “take the conclusions of these discussions back to the EU”.

She said she was exploring potential “movement” on the backstop that could secure the backing of a majority of MPs, with the aim of addressing concerns that it could become permanent and threaten the integrity of the United Kingdom.

The backstop is the “insurance policy” in the withdrawal deal, intended to ensure that whatever else happens, there will be no return to a visible border between Northern Ireland and the Irish Republic after the UK leaves the EU.

Both the UK and the EU believe that bringing back border checks could put the peace process at risk.

What did Mrs May say about another referendum?

She told MPs: “Our duty is to implement the decision of the first one.

“I fear a second referendum would set a difficult precedent that could have significant implications for how we handle referendums in this country.

When will the Brexit fee be scrapped?

Mrs May’s plan would mean millions of EU citizens living in the UK would have to apply for “settled status” to remain after Brexit.

Applicants must have lived in the UK for five years and had been expected to pay a fee of £65 each.

“Settled status” would give EU citizens the same access to healthcare and education after Britain leaves the EU as they have now.

Mrs May told MPs she had listened to the concerns of EU citizens – through campaign group the 3million – about the fees, which would be waived when the scheme was launched on 30 March.

The government launched a pilot scheme this week for people to apply for leave to remain through a smartphone app.

Mrs May said anyone applying during the pilot phase will have their fee reimbursed, with further details to be announced shortly.

Sudan’s Bashir to visit Qatar amid ongoing unrest at home