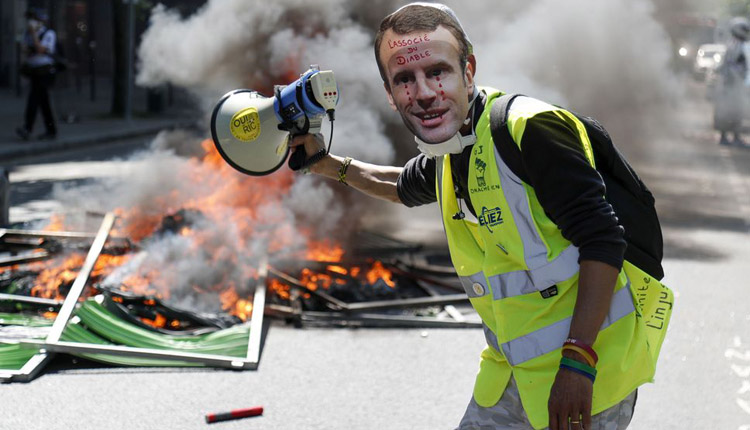 French police clashed with Yellow Vest protesters in Paris, firing tear gas and arresting scores of people as tens of thousands of police were mobilized to maintain order

This week’s fire at Notre-Dame Cathedral failed to damp the 23rd straight Saturday of action. Key members of the movement said that contesting President Emmanuel Macron’s policies — the initial motivation for the protests — isn’t at odds with grieving over damage to the iconic Gothic monument.

The French government said it would deploy 60,000 police on Saturday. By 4:30 p.m. local time, 189 people had been arrested, broadcaster BFM TV reported. Most of the arrests were for carrying banned items such as gas masks and objects that could be used as weapons. Police carried out more than 17,000 preventive checks.

Protesters marching on Saturday from the French finance ministry on the banks of the Seine River to Republique Square in the city’s center set alight motorbikes and garbage bins, as well as smashing in store fronts and at least one car.

Interior Minister Christophe Castaner warned on Friday that “Black Bloc” anarchists, who have been blamed for the worst of the violent acts in recent weeks, were expected to join the Yellow Vests. The Paris police banned protests near the Champs Elysees and Notre Dame.

Macron plans to hold a press conference on Thursday to outline tax and other measures stemming from the “Great Debate,” a two-month series of town-hall meetings where people were able to vent grievances. A speech planned for last Monday was canceled because of the cathedral fire.

The latest polls gauging public support for the Yellow Vests, conducted in late March, showed that about half the population are sympathetic to the cause, well below the figure of roughly 80 percent last year.

The movement began as a response to rising gasoline taxes, then developing into a wider protest about the cost of living and Macron’s governing style. The Yellow Vests have no central leadership, with protests organized by various local leaders via social media.