Sisi: ‘Egypt does not conspire against anyone’ 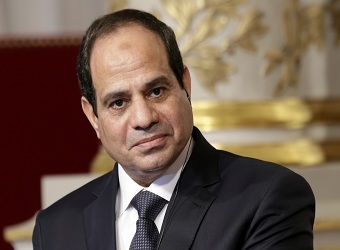 Egypt’s President Abdel Fattah al-Sisi stressed on Wednesday that his country does not conspire against anyone, in response to claims by Sudan’s President Omar Al-Bashir that Cairo has supported rebel groups in Sudan fighting against government forces.

On Tuesday, Al-Bashir accused Egypt of supporting fighters in Darfur, saying his forces seized Egyptian armoured vehicles in the possession of rebel groups.

Speaking at a joint press conference with Austrian Chancellor Christian Kern in Cairo, Sisi said that Egypt’s policy of not interfering in any other nation’s internal affairs has not changed and will not change.

Political tension has flared up between Cairo and Khartoum recently over Egypt’s southern Halayeb Triangle region, which Sudan says is rightfully Sudanese.

Last week, President Al-Bashir said in an interview with Al-Jazeera that his country is “still patient despite Egypt occupying part of our land.”

The Halayeb Triangle, which comprises three cities under Egyptian control, has been a source of tension between the two countries since Sudan gained independence from joint British-Egyptian rule in 1956, with rows occurring at times over the right to manage the region’s petroleum resources.

Egypt insists that the Halayeb triangle is part of its territory as set by an Anglo-Egyptian Condominium in 1899, which defines Egypt’s southern border as the 22nd parallel north.

The Egypt-Sudan Political Consultation Committee released a statement last month calling for a shift in media discourse between the two countries, though the Sudanese president has claimed that Egyptian media is still “defaming” his country.

The committee– which held a meeting last month in Khartoum headed by Sudan’s Foreign Minister Ibrahim Ghandour and Egyptian FM Sameh Shoukry– vowed to maintain cooperation and mutual support between the two countries in issues of common interest.

Shoukry also met with Al-Bashir during his most recent visit to Khartoum, conveying a message from Egyptian President Sisi that Cairo is committed to maintaining strategic ties between the brotherly countries of the Nile Valley.

Al-Bashir pointed to historic relations between the two countries, affirming that Egypt and Sudan are both “targeted” by the same challenges and that any split between the two would serve the “enemies of the nation,” without giving further clarification.

Media outlets in both countries exchanged attacks in recent month after Sudan’s media minister said in public statements that his country’s civilisation is older than that of Egypt.

In February, Al-Bashir made his first accusations that Egypt is harbouring and backing Sudanese opposition figures fighting his troops in Darfur, the Blue Nile and the South Kordofan regions.