Trump aides ask of Russian meddling: Does it matter? 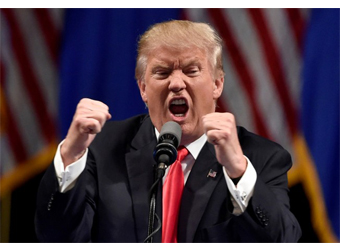 Donald Trump’s top aides on Sunday said the president-elect isn’t ready to accept the finding by intelligence officials that Moscow hacked Democratic emails in a bid to elevate Trump. Even if it’s true, they said, Trump still won the White House fair and square.

The pushback came a day before members of the Electoral College are scheduled to formally cast votes for Trump as the 45th president. While Democrats likely are powerless to stop it, they suggested Trump’s victory over Democrat Hillary Clinton would forever be tainted by Russian meddling.

Republican electors have been inundated by Trump opponents urging them to defy the results in their states and vote against Trump.

“This whole thing is a spin job,” said Trump’s incoming chief of staff, Reince Priebus. “And I think what the Democrats ought to do is look in the mirror and face the reality that they lost the election.”

Trump himself weighed in Sunday evening, tweeting, “If my many supporters acted and threatened people like those who lost the election are doing, they would be scorned & called terrible names!”

The partisan swipes mostly ignored warnings by foreign policy experts that part of Russia’s calculation also was likely payback for years of U.S. criticism of its own elections and a desire to portray America as a flawed champion of democracy — potentially weakening U.S. power on the world stage. Russia has vehemently denied the accusation.

Many lawmakers, including some leading Republicans, say voters may not have been swayed by the release of tens of thousands of private emails. But the fact that a foreign power tried to intervene in U.S. democracy and exploit divisions in American politics is cause for alarm, they say.

Still, Trump’s transition team and loyalists on Capitol Hill weren’t buying it, at least not on the eve of the Electoral College vote.

Asked about President Barack Obama’s vow to retaliate against the Russians, Conway said: “It seems like the president is under pressure from Team Hillary, who can’t accept the election results.”

Democrats say it’s unlikely the public will ever hear detailed evidence because doing so would disclose classified sources and methods. But with last week’s declaration by CIA Director John Brennan that there was “strong consensus” that Russia hacked Democrats to try to sway the election, lawmakers are stepping up demands for closed-door briefings and a separate congressional investigation.

California Rep. Adam Schiff, the senior Democrat on the House Intelligence Committee, said an unclassified intelligence review could be released within the next two weeks or three weeks.

As president-elect, Trump would have access to high-level intelligence on the matter, although it’s unclear what he’s been told. Trump has previously called the intelligence finding of Russian involvement “ridiculous.” On Sunday, Conway said she wasn’t privy to the same intelligence briefings as the president-elect and couldn’t say what he knows.

Donna Brazile, interim head of the Democratic National Committee, said the DNC was no match for a sophisticated foreign power in cyberspace that “weaponized” private emails to “sow misinformation and to sow discord” between Clinton and her primary rival, Vermont Sen. Bernie Sanders.