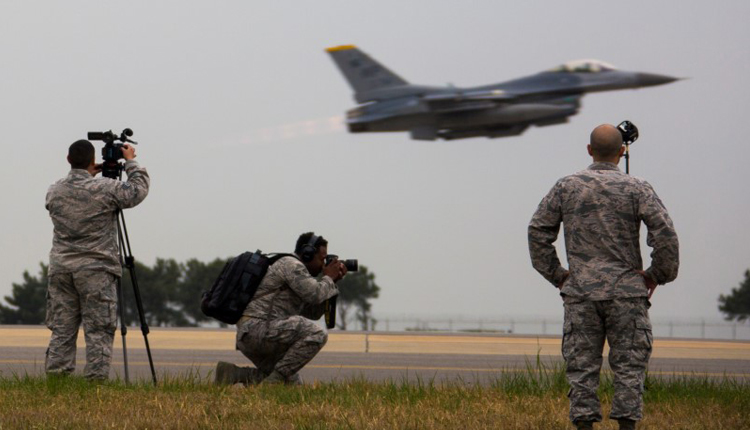 U.S. President Donald Trump’s declaration on Tuesday that he intended to end joint military exercises in Korea seemed to be news to both South Korean and U.S. military officials.

Trump made the remarks at a news conference after his summit with North Korean leader Kim Jong Un in Singapore, calling war games expensive and “provocative.”

South Korea’s Presidential Blue House said it needed to “to find out the precise meaning or intentions” of Trump’s statement, while adding that it was willing to “explore various measures to help the talks move forward more smoothly.”

A spokeswoman for U.S. military forces in Korea, meanwhile, said they had not received any direction to cease joint military drills.

“USFK has received no updated guidance on execution or cessation of training exercises – to include this fall’s schedule Ulchi Freedom Guardian,” U.S. Forces in Korea spokeswoman Lieutenant Colonel Jennifer Lovett said in a statement. “In coordination with our ROK partners, we will continue with our current military posture until we receive updated guidance from the Department of Defense (DoD) and/or Indo-Pacific Command (INDOPACOM).”

The Pentagon was not immediately able to flesh out Trump’s remarks about suspending drills, a move the U.S. military has long resisted.

Lieutenant Colonel Chris Logan, a spokesman, said only: “The Department of Defense continues to work with the White House, the interagency, and our allies and partners on the way forward following the U.S./DPRK summit. We will provide additional information as it becomes available.”

“I was shocked when he called the exercises ‘provocative,’ a very unlikely word to be used by a U.S. president,” the official said on condition of anonymity to discuss a politically sensitive issue.

If implemented, the plan could be one of the most concrete and controversial moves to come from Trump’s summit with Kim, who pledged to pursue denuclearization but offered no details.

South Korea said last month that the issue of U.S. troops stationed there was unrelated to any future peace treaty with North Korea and that American forces should stay even if such an agreement were signed.

“South Korea will have mixed feelings toward Trump’s remarks,” said Lee Il-woo, a director at Korea Defense Network in Seoul. “The country will welcome reducing the military exercises, as it could ease the decades-long tension on the Korean peninsula. But at the same time it will worry in terms of the possible negative consequences, as the reduction could scare South Koreans.”

North Korea has called for an end to the exercises as part of the United States’ ending its “hostile policy” toward the country.

China – historically North Korea’s closest partner – has also sought a “freeze for freeze” agreement in which the exercises would be suspended in exchange for North Korea’s stopping development of its weapons.

The U.S. had rejected such proposals in the past, but North Korea has declared an end to testing its nuclear weapons and ballistic missiles, and now Trump appears ready to end exercises while talks are ongoing.

About 28,500 U.S. troops are stationed in South Korea, a legacy of the Korean War, which ended in 1953 in an armistice that left the two Koreas technically still at war.

Given Kim only repeated vague commitments to pursue the “denuclearization of the Korean peninsula,” some observers questioned whether Trump was making overly drastic concessions.

“I hope – but am not yet confident – that (North Korea) will take steps that match the concessions Mr. Trump has already made by ending military exercises in South Korea and granting Mr. Kim legitimacy with this summit,” Thomas Countryman, a former acting under secretary of state for arms control under President Barack Obama, told Reuters.

“The key question is whether this concession by Mr. Trump was coordinated at all with the ROK Government,” Countryman said. “There has been real concern that he would only look after U.S. interests, not those of our long-standing allies.”

He noted, however, that exercises could easily be restarted if needed.

Mitchell Reiss, who served as the U.S. State Department’s director of policy planning from 2003-2005 and earlier negotiated with North Korea on behalf of the Korean Peninsula Energy Development Organization (KEDO), echoed the idea that it was important to make such decisions hand-in-hand with South Korea.

“My first question is whether our allies, the South Koreans, were consulted in advance of suspending these military exercises,” he told Reuters. “My second question is, what did we receive in return for this concession?”

Although cancelling the exercises would be “a major victory for North Korea and for China,” they could set the stage for bigger diplomatic breakthroughs, said Abraham Denmark, former assistant secretary of defense for Asia.

“The cancellation of the Team Spirit exercise in 1992 directly led to North Korea committing to denuclearization in 1993, signing an IAEA safeguards agreement, and set a positive environment for the 1994 Agreed Framework,” he said.

Daniel Russel, formerly the U.S. State Department’s top diplomat for Asia, said the statement signed by Kim and Trump was notable for not mentioning North Korea’s ballistic missiles, which may be able to carry a nuclear warhead as far as Washington or New York.

“If in fact the U.S. has committed to forego defensive exercises with South Korea, than I’d say Trump got skunked,” Russel said. “Trading our defense of South Korea for a promise is a lopsided deal that past presidents could have made but passed on.”