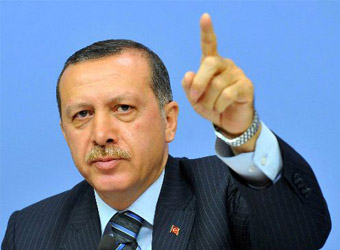 Turkey’s President Tayyip Erdogan demands the lifting of blockade on Qatar on Friday after approving legislation on deploying Turkish troops there, as the Gulf state faces a boycott by fellow Arab states over its claimed support for terrorism.

Erdogan vowed to keep supporting Qatar after his rapid approval of the bill, pushed through parliament on Wednesday, and he rejected accusations that it supported terrorism.

U.S. Secretary of State Rex Tillerson on Friday urged Saudi Arabia and other Gulf states to ease their blockade, saying it was causing unintended humanitarian consequences and affecting the U.S.-led fight against Islamic State.

Referring to Tillerson’s comments on the blockade, Erdogan said in a speech at a Ramadan fast-breaking dinner in Istanbul: “I say it should be lifted completely”.

“There are those who are uncomfortable with us standing by our Qatari brothers, providing them with food. I’m sorry, we will continue to give Qatar every kind of support.

“Until now I have not seen Qatar give support to terror,” he added.

Arab states tightened their squeeze on Qatar on Friday by putting dozens of figures with links to the country on terrorism blacklists [nL8N1J61K3].

After an initial deployment of Turkish troops at a base in Doha, Turkish warplanes and ships will also be sent, the mass-circulation Hurriyet newspaper said on its website on Friday.

“The number of Turkish warplanes and Turkish warships going to the base will become clear after the preparation of a report based on an initial assessment at the base,” Hurriyet said.

A Turkish delegation would go to Qatar in the coming days to assess the situation at the base, where around 90 Turkish soldiers are currently based, it said.

Turkish officials were not available to comment on the report but Hurriyet said there were plans send some 200 to 250 soldiers within two months in the initial stage.

Erdogan also approved another accord between Turkey and Qatar on military training cooperation late on Thursday. Both bills were drawn up before the dispute erupted. Turkey has also pledged to provide food and water supplies to Qatar [nL8N1J432D].

Erdogan has said isolating Qatar would not resolve any problems. Erdogan, who has long tried to play the role of a regional power broker, said Ankara would do everything in its power to help end the regional crisis.

Turkey has maintained good relations with Qatar as well as several of its Gulf Arab neighbors. Turkey and Qatar have both provided support for the Muslim Brotherhood in Egypt and backed rebels fighting to overthrow Syrian President Bashar al-Assad.

The bill did not specify how many troops would go nor when.