Who will win the “Iron Throne”? All bets are off ! 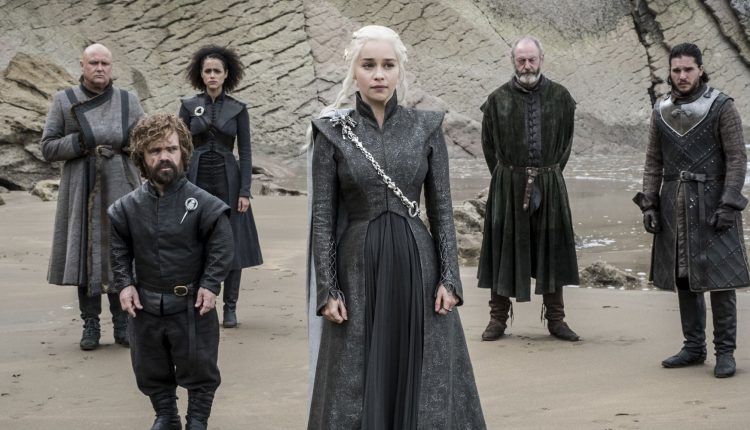 Thousands of people are dead. Confidence in Daenerys is equally destroyed. Fans are at the end of their ropes.  David Benioff and Dan Weiss’ adaptation of George R.R. Martin now stands with only 80 minutes left to wrap it all up.

The last five episodes of the final season of Game of Thrones have been a roller-coaster of shock, disappointment and any other emotion you care to think of, and yet we still have no real clue of how the show will end.

Here is what Vox predicted for Game of Thrones’ series finale

Jon and Daenerys both die, and a ruling council is installed in Westeros

I think Game of Thrones has inevitably set the table for a scenario in which Jon Snow must kill his girlfriend-aunt Daenerys Targaryen. In the show’s second-to-last episode, “The Bells,” Dany snapped and reduced King’s Landing to rubble and ash while Jon Snow watched in horror. There were several shots of Jon looking up at the sky and down at the carnage, seemingly coming to the realization that Dany needs to be stopped.

Given all that, here’s my prediction for how the story ends: Dany takes the Iron Throne and kills Tyrion for freeing Jaime Lannister. Jon knows he must kill Dany, but hesitates because he loves her; that will leave room for Grey Worm to step in and save his queen, and for both Dany and Jon to die, so that neither Targaryen can inherit the throne. By the end of the episode, I don’t believe the Iron Throne will exist; in its place, I imagine there will be a Westeros council comprised of all Game of Thrones’ remaining or would-be leaders — Sansa, Grey Worm, Davos, etc. — who collectively make decisions for the realm.

I want to agree with the “Jon kills Dany” theory, as it makes the most sense with what we’ve seen so far. But then again, I thought the narrative logic of Game of Thrones meant that Jaime would kill Cersei, and that clearly didn’t work out. So I’m going to offer one of my more off-the-wall theories about another character who seems marked for death: Grey Worm.

The Unsullied leader precipitated the massacre of surrendering Lannister soldiers in Game of Thrones’ penultimate episode, a pretty awful crime that seems likely to be punished in the finale. My guess is that the show really sticks the emotional knife in on this one and has Arya assassinate him while wearing Missandei’s face as part of a broader Stark coup against Daenerys. — Zack Beauchamp

With Dany having committed an unforgivable act by burning King’s Landing, I expect Jon, Tyrion, and Arya will work together to take her down. My guess is that Tyrion hatches the plot, Arya kills the dragon, and Jon kills Dany. Contra Alex, my guess is that Jon survives and ends up on the Iron Throne himself, despite Game of Thrones not doing a remotely convincing job at explaining why he’d be any good at it.

Jon — or “Aegon” — will announce that he will take no wife and father no children, meaning that he will be the last Targaryen king of Westeros. After that, the leaders of each of the Seven Kingdoms (eight if you count the Iron Islands) will vote to choose a successor. (This is an idea Tyrion floated in season seven as an alternative to hereditary monarchy.)

Oh, and Bronn will end up getting a vote as Lord of Highgarden, because a Lannister always pays his debts.

Daenerys lives, but leaves Westeros by choice — after destroying the Iron Throne

I think Daenerys will become Game of Thrones’ version of Watchmen’s Ozymandias — a character known for destroying a dystopian Manhattan to save humanity from a nuclear war — in a synergistic nod to HBO’s anticipated adaptation of the popular comic.

Here’s how: Right after the bells tolled in Game of Thrones’ penultimate episode, Dany realized that the only way to end the Game of Thrones was to destroy its prize: King’s Landing. Without a central city, there’s no need for a central king. So I expect that Dany will command Drogon to melt the Iron Throne before flying east to live among the Dothraki as the bloodiest, fiercest Khaleesi ever.

The backyard lords of Westeros will be able to live in peace in their small fiefdoms, there will be no superior ruler, and knowing that a mad Mother of Dragons lives just across the Narrow Sea will deter people from making any ill-advised power grabs.

Don’t get me wrong, Dany deserves to die for her war crimes. But Arya, Tyrion and Jon will surely realize that killing her would only perpetuate the eternal cycle of succession wars. And if she lives, I think she will succeed where Jon Snow failed in unifying the people against a common enemy. It’s just that said enemy will be herself.

Tyrion is toast, Arya kills Daenerys, and Jon installs Sansa to rule what’s left of the Seven Kingdoms before exiling himself to the Wall

There’s a lot of evidence that Arya has supplanted Jon Snow as the character who’s driving the narrative direction of Game of Thrones’ final season, and I think after the carnage of “The Bells,” she’s going to be out for Daenerys’s blood. Dany, meanwhile, is going to be out for revenge against Tyrion once she learns that Tyrion freed his brother Jaime from her captivity. All signs point to Jon being unable to save Tyrion from Dany’s wrath, and I believe Tyrion’s execution will be the act that finally crosses the line for Jon: He’ll stand aside and let Arya assassinate Dany.

Meanwhile, Varys’s spreading of the news that Jon is a true Targaryen will enable Jon to establish Winterfell as the new capital of Westeros and Sansa as the ruler of (what’s left of) the Seven Kingdoms. (With Bran as wise counsel, of course.) But Jon clearly has no heart left for hanging around his old family, so — while I simultaneously feel it would be a weird move, given how much he always seemed to resent the Night’s Watch — I believe he’s going to exile himself to Castle Black, where Tormund was headed before him, possibly to rebuild the Night’s Watch and the Wall itself. At least hopefully he’ll have a lovely reunion with Ghost!

I think Game of Thrones is heading in an Animal Farm-type direction, where the moral of the story is that the entire cycle of events kicked off by Robert’s Rebellion accomplished nothing at all and Daenerys Targaryen, first of her name, is simply installed as the head of a durable authoritarian regime.

Yes, she will kill Tyrion after she discovers he betrayed her.

Yes, Jon will turn against her after her atrocities. But he’s much too stupid and whiny to launch an effective anti-Daenerys plot so he’s just going to get caught and killed. Arya will have learned that the entire cycle of violence and vengeance is destructive and will ride north to Winterfell, where she’ll advise Sansa to simply bend the knee and acknowledge Daenerys as queen. Yes, Daenerys is a terrible person. But if Sansa is remotely serious about caring for the interests of the common people, she’ll see that the last thing the smallfolk need is for northern cities to be torched by dragonfire.

Winter is here and nobody knows how long it will last — remember that element of Game of Thrones’ worldbuilding? — and it’s time for responsible leaders to focus on supply-chain management.

At the end of the day it will turn out that massacring the civilian population of King’s Landing was not the work of a “Mad Queen” at all but rather a reasonable deterrent strategy. Given that her entire base of power rests on a single killable dragon, Daenerys can’t afford to subdue the Seven Kingdoms one castle at a time knowing that a single scorpion bolt could be the end of her regime. If everyone was allowed to play the game of “shoot at the dragon and then surrender once the dragon destroys your air defenses,” her luck would run out soon enough. But since everyone now knows there will be no mercy and that the odds are in her favor, they’ll see the light of day and surrender.

A grim peace will settle in, with everyone a bit unsettled by the lack of an heir, the new queen’s potential infertility, and the question of what new horrors will be visited on the realm when the inevitable succession crisis comes. —

A just, farming-focused ending for the smallfolk

I would be vastly more satisfied with an authoritarian Dany victory than the “Jon/Arya/Sansa kill Dany and plot a just future” outcome that Game of Thrones’ writers are clearly gunning for. In that scenario, I suspect Dany kills Sansa and installs Grey Worm or another loyal ally as Warden of the North; there’s no reason for her to trust Sansa even after Sansa bends the knee. This story cannot end with the least violent party winning.

But my greatest hope for the series finale is that it somehow addresses the conditions of the smallfolk: the everyday peasants of Westeros, who should be the primary concern of policymakers in King’s Landing yet somehow never, ever are. George R.R. Martin famously criticized J.R.R. Tolkien for not exploring Aragorn’s tax policy as King of Gondor and Ardor. Well, let’s hear some economic policy, then! Lay out what the new regime will do for living standards!

So, what would that look like? In actual English history (the model for Westeros in several ways), the wages and living standards of common folk didn’t begin to increase until agricultural productivity began to rise, producing more crops with the same farm labor. There were a bunch of reasons for this, both political (new management/tenancy systems) and technological (crop rotation, especially) but the result was an improvement in living standards that was further accelerated by the Industrial Revolution.

Ideally, Game of Thrones will end with Dany, having killed off the Starks and secured her rule for the time being, embarking on a crash R&D program in which the Citadel (preferably run by someone other than Stark sympathizer and Son-of-Dragon-Food Samwell Tarly) gets all the wealth and resources of the Seven Kingdoms to improve agricultural productivity. Dany’s army could be used as infrastructure workers to create a better road system, enabling the creation of a national market in wheat, barley, and other high-yield crops.

Last, and perhaps most important, is land reform. While regional lords should retain their castles, their arable land should be redistributed to the peasants farming it, a process which analysts like Joe Studwell have argued was key to fast economic growth in Japan, Taiwan, and South Korea. It’s the kind of populist policy that will play well in the Westerosi heartland, and lives up to Dany’s name as the breaker of chains. She may be a tyrant, but she should be a left-agrarian revolutionary tyrant, at least.

Growth ‘may slow, but only slightly’ after U.S. restrictions: Huawei founder