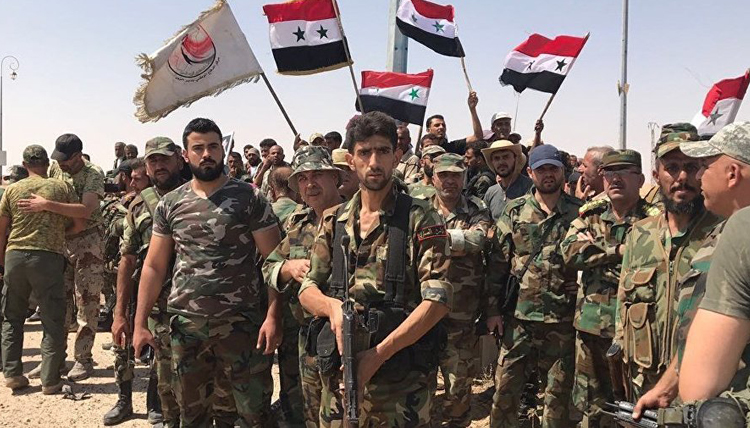 The Syrian army began an intense bombardment of a rebel enclave near Homs on Monday, a war monitor said, as President Bashar al-Assad pushed to recapture all the remaining areas his forces have besieged.

The attack comes as Syrian state television broadcast footage of work to clear roads into part of a pocket in south Damascus where fighting had raged, to allow some rebels there to withdraw in a surrender deal, it said.

Late on Sunday, the Syrian army said missiles had struck bases in northern Syria, describing it as a “new aggression” by its enemies. A war monitor said the strikes had targeted a rocket cache and killed Iranians and Iraqi fighters.

Israel’s military, which has previously used air strikes in Syria to target a growing Iranian presence there, said it did not comment on such reports and had no information on the attack.

The Syrian army’s assault on the pocket between Homs and Hama – the most populous remaining besieged area in Syria – included both air strikes and artillery, said the Syrian Observatory for Human Rights, the war monitor.

Reinforcements had arrived in government-held areas before the bombardment, which targeted Rastan, the biggest town in the pocket, and several nearby villages, the Observatory said.

Syrian rebels hold large swathes of both northwest and southwest Syria. An alliance of Kurdish and Arab militias backed by the United States holds large parts of northern and eastern Syria after an offensive against Islamic State last year.

On Sunday, that alliance, the Syrian Democratic Forces (SDF), said it had recaptured several villages that pro-government forces had seized from it in eastern Syria.

The pocket in southern Damascus is split between areas held by Islamic State and rebel groups. It has been the focus of a massive bombardment and intense fighting since the Syrian army recaptured eastern Ghouta earlier this month.

Late on Sunday, state media reported that one of the rebel groups there, the jihadist Tahrir al-Sham alliance, which includes Syria’s former al-Qaeda affiliate, had agreed to withdraw to opposition-held Idlib province in northern Syria.

Footage on state television on Monday showed what it said was preparations for that withdrawal, along with the departure of buses in northern Syria to evacuate civilians from two government-held villages besieged by insurgents.

The surrender deal for Tahrir al-Sham in south Damascus was part of a deal to allow people to leave the two government-held Shi’ite villages, al-Foua and Kefraya, it said.

However, SANA state news agency reported continued intensive bombardment of al-Hajar al-Aswad, another area in the south Damascus pocket where Islamic State fighters are based.