7 killed After Tanker Blaze In Afghanistan

International News
By Administrator On Apr 6, 2012 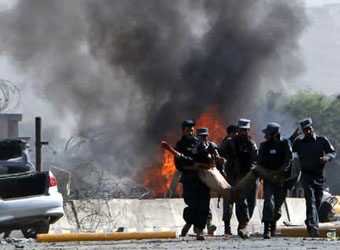 The Taliban claimed they fired a rocket at the fuel tanker, causing it to explode. But Razaq said no rockets were fired.

He said the tanker caught on fire after it overturned and that a passing car also was set ablaze.

In northeastern Afghanistan, a suicide bomber assassinated the head of the peace council in Kunar province, which works to bring Taliban fighters to the negotiating table.

The bomber set off his explosives next to Sayed Fazelullah Wahidi as he was walking home from Friday prayers with his son and bodyguard in Watapoor district, said Gen. Ewaz Mohammad Nazari, the chief of police in Kunar.

“The suicide bomber came up to him and greeted him and then blew himself up,” Nazari said.

He said Wahidi was killed at the scene. His son died in a hospital where he and the bodyguard were treated for their injuries, Nazari said.

Also in the south, a NATO service member was killed Thursday in a roadside bombing, the U.S.-led coalition said Friday. No other details were disclosed. So far this year, 98 NATO troops have died in Afghanistan, Associated Press reported.