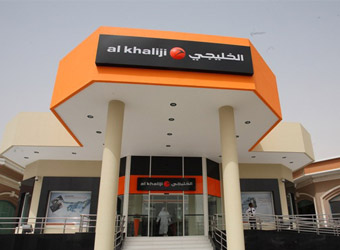 The Board of Directors of Al Khalij Commercial Bank (Al khaliji) Q.S.C. approved on April 15th, 2012 the consolidated financial statements for the period ended 31 March 2012.

Commenting on the results, Robin McCall, Group Chief Executive Officer of Al khaliji said: “We continue to grow the bank in our targeted areas of expertise and we are pleased with the sustained growth since March last year.”

Strong fee income has lifted profit growth, when compared to the corresponding period last year, with reported net profit of QR122m for Q1, 2012. The Corporate book continues to drive our business as Treasury returns moderate in line with our planned strategy. Commenting on the organization’s performance McCall said “Al khaliji is managed and positioned for the long-term and this quarter’s performance is in line with expectations. A strategic priority for 2012 is to continue to strengthen the customer product proposition an area where Al khaliji has been recognized as a market leader, as reflected in its recent award as the 1Best Premium Bank In the Middle East.”

Based on reported figures, the Group’s Net Interest Income, as at March 31, 2012, amounted to QR137m. The net operating income reached QR216m. Fee income grew by 15% and dividend income increased 10% on the same quarter in 2011. The bank continues to drive improvements in efficiency and General and Administration expenses was 10% lower than the same period last year.

Impairment losses on loans improved as the bank was able to benefit from net recoveries. NPL’s, at less than 1%, remain at low levels.

Despite a large early repayment, Loans and Advances increased by a further 2% percent since the beginning of the year, and reached QR11.6bn on 31 March. With Customer deposits at QR12.1bn, an increase of 25 % when compared to 31 March 2011, it means that the bank is well positioned for future growth with a Loan to Deposit Ratio below 100%.

At the end of the board meeting, Sh. Hamad Bin Faisal Bin Thani AL Thani, Chairman of the Board of Directors said, “The start of the year is encouraging in an increasingly competitive market. Forecast growth in 2012 for the Qatar non-hydrocarbon sector, in particular financial services, is compelling. We believe that the QCB will continue to play a key role in prudently managing the local financial economy and welcome their latest initiative to track the Loan to Deposit Ratio’s of Qatari banks.”

Commenting on the appointment of new Board Members the chairman concluded, “Al khaliji is fortunate in having one of the strongest and most distinguished Boards of any company in the region. I welcome the new Directors and the added expertise they bring to enable us to enhance shareholder value in the coming years. On behalf of the Board I would like to thank our employees for their continued efforts to achieve these results and our customers and shareholders for their ongoing trust in al khaliji.”