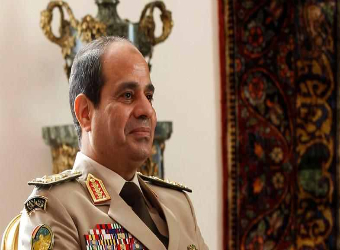 Abdel-Fattah al-Sisi, the Egyptian defense minister who has signaled he may seek the presidency, started a campaign to build one million housing units.

The project will have a total value of $40 billion, according to a statement yesterday by United Arab Emirates-based Arabtec Holding Co., which will build the homes with Egypt’s armed forces over five years. It will focus on Egyptians with “limited income,” according to statements posted yesterday on the official Facebook page of military spokesman Ahmed Mohamed Ali.

Al-Sisi  has said that he can’t ignore popular calls for him to run for president, though he hasn’t officially announced his candidacy. The U.A.E., Saudi Arabia and Kuwait have pledged billions of dollars in aid for Egypt since the ouster of President Mohamed Morsi in July.

“The chances are that if he stands, he is going to win anyway,” Ghanem Nuseibeh, founder of Cornerstone Global Associates, which advises clients on risk in the Middle East, said of al-Sisi . “The key message is that both the providers of the aid and the military are seeking to sort out the long-term challenges, to address the root-causes of dissent in Egypt, and much of that is economic.”

Hasan Abdullah Ismaik, Arabtec’s chief executive officer, said the plan reflects the U.A.E’s desire to support Egypt’s leadership, the military statement cited him as saying. The housing project will be the largest in the Arab world and will provide jobs for more than one million Egyptians, Ismaik said. Taher Abdullah, head of the armed forces engineering authority, said details of the project are still being studied.

Ismaik told reporters in televised comments that al-Sisi  has “insisted” on offering the land for the project for free.

Arabtec shares climbed 1.7 percent, the most since Feb. 25, to 4.8 dirhams at the close in Dubai.

“The army is possibly playing the role of the guarantor of the deployment of aid money,” said Wael Ziada, head of research at Cairo-based investment bank EFG-Hermes Holding SAE. “Arabtec is a candidate to win more projects if they have the ability to execute, given their close ties with Abu Dhabi,”

In Egypt, complaints about high prices and unemployment, coupled with political grievances, fueled anger at Mursi and predecessor Hosni Mubarak who was toppled in a 2011 revolt. The challenges will remain for whoever lands the top job next.

Al-Sisi  is hailed by supporters as the only man who can restore security and stability after years of turmoil. His opponents say a presidential bid would confirm that his leadership in Mursi’s ouster was a “coup” and accuse him of spearheading a bloody campaign against the Islamist leader’s supporters since.

Egypt’s economy is likely to grow less than the government’s target of at least 3 percent because of political turmoil, Ashraf el-Arabi, minister of planning and international cooperation, said yesterday. Speaking in an interview in Cairo, el-Arabi said that he hopes that gross domestic product growth will exceed 2 percent in the fiscal year that ends in June.

The average estimate of 16 economists on Bloomberg is for 2.8 percent growth in 2014. Finance Minister Hany Kadry said this month that the economy grew 1.4 percent in the second quarter of the fiscal year.