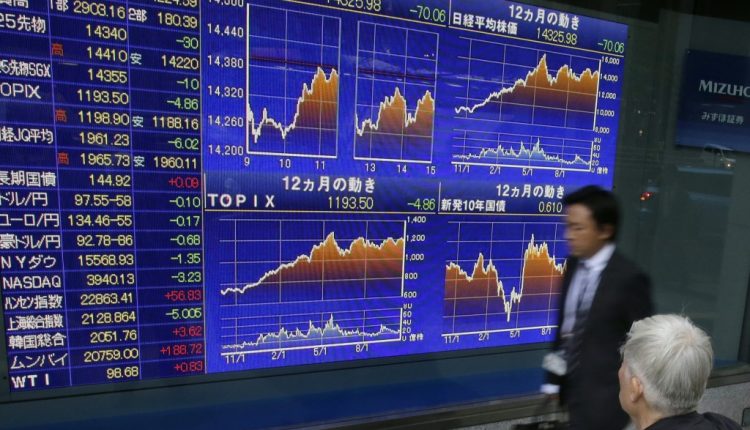 Asian stocks closed higher on Thursday, with markets shaking off some of the trade jitters seen overnight after the Trump administration announced a list of Chinese goods that may be subject to new tariffs.

After the negative reaction in the last session to tariff announcements, China markets led the advance in the region. The Shanghai composite pared all of Wednesday’s sharp losses, closing up 2.18 percent at 2,838.30 and the smaller Shenzhen composite climbed 2.74 percent to 1,597.17.

The Nikkei 225 rose 1.17 percent, or 255.75 points, to close at 22,187.96, nearly reversing its declines from the previous session with some support coming from the weaker yen. The fishery and forest subindex led gains, rising 2.64 percent, while pharmaceuticals and telecommunications also recorded significant moves higher.

In Seoul, the Kospi added 0.19 percent to finish the day at 2,285.06. Technology was a mixed bag, with Samsung Electronics down 1.09 percent, while automakers climbed.

Those moves came after the Trump administration on Tuesday unveiled a list of 10 percent tariffs on $200 billion in Chinese products. The duties will take effect only after a review process is completed. In response, China threatened to retaliate with “qualitative measures,” Reuters said, with the country’s commerce ministry adding that it would complain to the World Trade Organization.

This latest salvo also came just days after tariffs from the U.S. and China on $34 billion in products from each country took effect on Friday.

“Each time we take a further step into the war zone, markets have a little wobble like the one they have just had. Equities sell off a bit, then, so long as there is no further bad news for a week or so, they begin to sit back up again,” Robert Carnell, head of Asia Pacific research at ING Bank, said in a note.

However, given the long-lasting effects such trade developments will likely have, they did not merit “occasional small temporary correction[s], followed by swift recovery” but “deeper, and prolonged selling,” Carnell added.

Market participants increasingly expect the trade dispute to be a drawn-out affair.

“The July 11 announcement by the U.S. reaffirms our view that we are in a protracted escalatory cycle … However, we continue to expect negotiations and de-escalation to remain the end outcome,” Morgan Stanley economists said in a note. “However, the more protracted the process, the greater the impact on business confidence and capex, which would in turn weigh on global growth,” they added.

Global stock markets declined in the last session on the back of the latest developments in the ongoing trade dispute, with the Dow Jones Industrial Average declining 0.88 percent, or 219.21 points, to close at 24,700.45. The index had previously closed higher for four straight sessions as markets were upbeat about earnings season.

European and Asian equities slumped on Wednesday on the back of the latest ramp up in trade tensions between the world’s two largest economies, which investors fear could negatively affect global growth. The pan-European Stoxx 600 closed down 1.2 percent while China markets led the declines in Asia, with the Shanghai composite dropping 1.78 percent.

The greenback was steady after firming overnight amid the jitters, with the dollar index last at 94.709. Against the yen, the dollar traded at 112.25 at 2:44 p.m. HK/SIN after crossing the 112 level for the first time in around six months overnight.

Of note, the yuan slipped below the 6.7 level Thursday morning amid the focus on trade before recovering some losses later. The on-shore yuan last traded at 6.6762 to the dollar, with China’s central bank having fixed the daily midpoint at 6.6726 per dollar before the market open. That was the weakest official fixing since Aug. 18, 2017, Reuters said.

On the commodities front, oil prices retraced some of their steep losses made overnight on the back of trade worries and supply concerns following news that Libya would be resuming exports. Brent crude futures were higher by 1.72 percent at $74.66 per barrel after settling 6.9 percent lower on Wednesday, the largest drop in one day since 2016. U.S. crude futures tacked on 0.53 percent to trade at $70.75.

In individual movers, shares of ZTE jumped 22.08 percent in Hong Kong by 3:00 p.m. HK/SIN while Shanghai shares closed up 10 percent. The moves came on the back of news that the telecommunications equipment maker was set to resume business after signing an agreement with the U.S., Reuters reported.