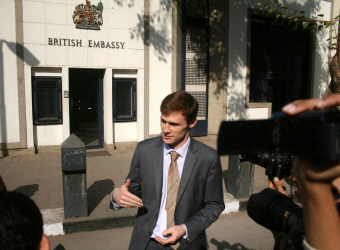 British Ambassador to Cairo John Casson announced Thursday the signing of a £2 million ($2.5 million) British programme to assist Egypt in combating human trafficking, saying that while there are no magical solutions to the problem, the UK strongly supports Cairo’s efforts in this area.

Casson said the law, signed by President Abdel Fattah al-Sisi in November 2016 amid a hike in the number of migrants departing the country for Europe, underscores Egypt’s political will to curb this phenomenon.

The British ambassador also praised Egypt’s role in aiding immigrants and refugees and its assistance to neighboring Libya, which is considered the main point of departure for refugees and irregular migrants traveling to Europe.

The head of Egypt’s National Coordinating Committee for Combating and Preventing Illegal Immigration (NCCPIM) Ambassador Naela Gabr welcomed the announcement of the programme, which is under the supervision of the International Organization for Migration.

Nearly 210,000 irregular immigrants arrived in Europe across the Mediterranean between January and June 2016.

Approximately 3,000 irregular immigrants drowned in the Mediterranean during the same period, according to the IOM.