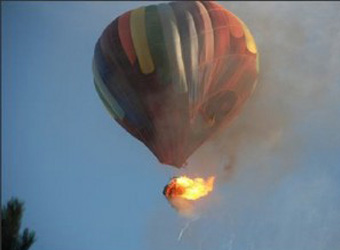 The Briton, Michael Rennie, the only tourist who survived the crash of a hot air balloon in the southern city of Luxor, has returned home to the UK capital London Friday night after undergoing medical treatment at a Cairo hospital.

Rennie, escaped with only minor injuries and no burns, has jumped from the balloon after it caught fire and before it plummeted to the ground, killing 19 others, including his wife.

Before leaving the hospital, Rennie has thanked all the medical staff in Cairo for helping him to recover from the injuries he suffered after jumping from the hot air balloon.

The only other survivor — the balloon’s Egyptian pilot, who also jumped out — suffered heavy burns.

The sightseeing balloon on a sunrise flight Tuesday over the ancient monuments of Luxor was carrying 20 tourists from Britain, Hong Kong, Japan, Belgium, Hungary and France. It was in the process of landing when a fuel line for the burner heating the air in the balloon broke, sparking a fire, according to preliminary indications, investigators have said.

Rennie and the Egyptian pilot, Momin Murad, managed to escape the balloon’s gondola when it was still relatively close to the ground. The balloon then rose back up some 300 meters (1,000 feet) into the air. The fire spread to the balloon itself, which burst, sending it plummeting into a sugar cane field.

Rennie told his doctors that “he fell in a muddy area, and this helped him,”. “There are no fractures. He only has minor bruises … and scratches.” His wife was killed in the crash, the doctor said.

The head of the Civil Aviation Authority’s technical investigation into the accident, Walid el-Moqadem, said he has asked to speak to Rennie, who Egyptian media said did speak with a separate, criminal prosecutor investigating the crash to rule out foul play.

Rennie told criminal investigators that most of those in the balloon squatted when the fire broke out, following the pilot’s instructions, according to the Egyptian newspaper Al-Watan.