Canadians Held Without Charge in Egypt Leave the Country 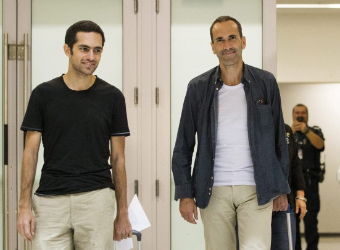 Two Canadians who were barred from leaving Egypt following weeks of imprisonment without charges have returned to Canada.

Filmmaker John Greyson and physician Tarek Loubani left Cairo on a flight Friday morning and were warmly greeted by family and friends when they landed in Toronto.

“We’re delighted to be here, to be free,” Loubani said.

Egypt lifted a travel ban for the two on Thursday. The pair weren’t allowed to board a plane after they were released from jail Sunday. Greyson and Loubani had been held without charges since Aug. 15, when they were arrested while observing a demonstration in support of ousted President Mohammed Morsi in which the Canadians said they saw at least 50 protesters killed.

They said their thoughts remain with the 600 detainees arrested on the same day as them and they urged Egyptian authorities to either charge them or free them.

Canadian Foreign Minister John Baird had warned Egypt that their detention was a significant threat to relations between the two countries.

Lynne Yelich, a junior minister responsible for consular affairs, thanked the Egyptian government in a statement for “its considerable assistance.” The statement also included a cautionary note to Canadians to visit a Canadian government website, travel.gc.ca, “to read up on local laws before travelling.”

Badr Abdel-Atty, Egypt’s foreign ministry spokesman, said the two were accused of participating in illegal protests and for resisting authorities during arrest, like many others who were arrested on Aug. 15 by the Fatah mosque, where supporters of Morsi were holding a rally. He said the accusations against them had been dropped.

The two Canadians said Loubani heeded a call for a doctor and began treating wounded demonstrators while Greyson recorded the unrest on video. They said they were arrested after asking for directions back to their hotel at a police checkpoint. They said they were beaten and subjected to degrading treatment in the Egyptian prison and spent most of the time crammed with other inmates in a filthy, cockroach-infested prison cell. The pair staged a 16-day hunger strike to try to pressure Egyptian officials to release them, but started eating food again last week.

The two said they only intended to stay overnight in Cairo on their way to Gaza and acknowledged on Friday it was unwise for them to take a look at the protests in the Egyptian capital.

“In hindsight it’s really obvious we made mistakes,” Loubani said, who admitted they misjudged how Egyptian authorities would view their actions.

Cutback Of US Aid To Egypt Leaves Israel Nervous