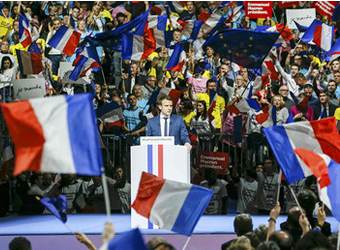 Centrist candidate shaking up the French presidential campaign has vowed to unite the nation and boost ties with Germany in his first big speech.

Emmanuel Macron also promised to boost defence spending when he spoke to a crowd in the eastern city of Lyon.

The former Socialist economy minister set up his own party only last year.

Opinion polls suggest he may face off with the far right’s Marine Le Pen, who is to deliver a keynote speech on Sunday, in the second round of voting.

Her National Front (FN) party began a two-day rally, also in Lyon, to promote its manifesto, which promises to restore French sovereignty over the country’s budget, borders, money, and laws.

However, the party dropped a former pledge to restore the death penalty.

The French go to the polls on 23 April in one of the most open races in decades, with the incumbent Socialist President, Francois Hollande, declining to stand for a second term.

The candidate of the conservative opposition Republicans, Francois Fillon, was seen as the frontrunner until allegations last month of payments made to his wife for parliamentary work clouded his prospects.

Macron, whose party is called En Marche (English: On The Move), sought to portray himself as a unifier before a crowd said to number at least 8,000.

“I am not going to say that the left or right is meaningless, that they are the same thing, but are these divisions not a hurdle?” he asked.

“I want to reconcile the two Frances that have been growing apart for too long,” he said.

“I want a more European defence, partnerships between France and Germany,” he added.

He also appeared to mock U.S. President Donald Trump’s policy of building a wall with Mexico, likening it to France’s row of fortifications which failed to stop Hitler in 1940.

“I don’t want to build a wall. I can assure you there’s no wall in my programme,” he stated.

“I used to vote Socialist but my husband has been saying for years that we have to overcome the left-right division and thanks to Emmanuel Macron, I am convinced,” she said.

Opinion polls suggest that either he or Fillon will come second in the first round behind Le Pen before winning the 7 May run-off against her comfortably.

Opening the FN rally, Ms Le Pen’s campaign director, David Rachline, said the election of Trump and anti-European votes, including the British vote to leave the EU, should inspire the party.

“Other ways, other views are fortunately possible,” he said.

“After Trump’s victory, after Brexit, after votes in Hungary, Austria, and after the rise of our German patriotic friends from the AfD, it is now our turn to thwart predictions and the system’s militant polls.”

Fillon has battled on in the face of opinion polls suggesting most French voters think he should pull out of the election.

“People are not seeking justice,” he told a rally on Friday. “They are seeking to destroy me, and beyond me to destroy the Right and steal an election.”

He denies allegations that he misappropriated public funds, by claiming he employed his wife in a non-existent role.

He is currently trailing the other three candidates by a few percentage points in opinion polls.

The hard left’s candidate, Jean-Luc Melenchon, is given about ten percent in the same polls.