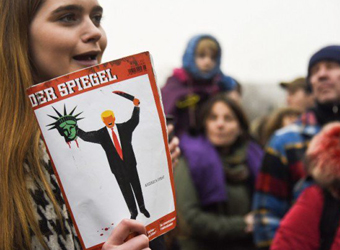 Some German newspapers criticised the cartoon, while the German vice-president of the European Parliament called it tasteless.

The cartoonist, Edel Rodriguez, said that the image represented the beheading of democracy.

United States-German relations have deteriorated under Trump, who has criticised the policies of German Chancellor Angela Merkel.

He said last month that her policy of welcoming masses of migrants who arrived in Germany had been a catastrophic mistake.

The front cover image is similar to one that appeared on the front page of the New York Daily News in December 2015, also showing Trump beheading the Statue of Liberty but in a less gory fashion.

•Mass-market tabloid Bild, which has the Jihadi John headline, says that Der Spiegel has been accused of anti-Americanism in the past.

•”The Spiegel cover is exactly what Trump needs  a distorted image of him that he can make use of for his own distorted image of the press,” writes the Frankfurter Allgemeine Zeitung broadsheet. It says the cover lacks a sense of irony and that equating Trump and terrorism is too simple.

•Die Welt, another broadsheet, says that the cover “damages journalism rather than the new president because it confirms many people’s preconception that the ‘mainstream media does biased reporting and that many journalists prefer to promote their own worldview than be neutral witnesses to what is happening.

Rodriguez- who arrived in the US as a political refugee from Cuba in 1980 told the Washington Post that he wanted to make a comparison between the Islamic State and Donald Trump- saying both sides are extremists.

Der Spiegel editor Klaus Brinkbaumer wrote in an editorial that Trump was attempting a coup from the top and wanted to establish an illiberal democracy.

The White House has accused liberal media groups of false and irresponsible reporting designed to smear Trump and the new administration.

Alexander Graf Lambsdorff, a member of the Germany’s Free Democrats and vice-president of the European Parliament, said the cover said more about Der Spiegel journalists than Trump.

“The cover plays on the lives of terror victims in a very nasty way,” he said.

Several other magazines are using the front covers of their next editions to comment on the U.S. president and his policies.

British weekly The Economist, which has endorsed both Republican and Democratic presidents, pictures Trump throwing a molotov cocktail.