Cyprus talks to take international turn amid hope for deal 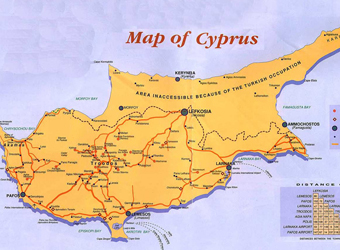 International diplomats are set to join the rival leaders of ethnically split Cyprus for talks that the UN says are the best chance to reunify the island after four decades of division.

UK Foreign Secretary Boris Johnson and his Greek and Turkish counterparts will be in Geneva to discuss security.

The goal is for the two sides to share power in a two-state federation.

It was the first time they had done so, according to the UN, and was hailed as an important advance on the path towards a deal.

New UN Secretary General Antonio Guterres is attending the talks in Geneva, his first foreign trip in the role.

Cyprus has been split since Turkish troops invaded in 1974 following a coup by Greek Cypriots backed by Athens.

Turkey still has 30,000 troops stationed in the island’s north.

Britain, Turkey and Greece are the guarantor of Cyprus’s independence, which means they can step in if necessary to restore constitutional order.

Reaching a deal is possible, says Espen Barth Eide, the UN special adviser on Cyprus, though he cautioned that “some of the most complicated and emotional issues” remained outstanding.

While it is unlikely that a “comprehensive settlement” will be agreed in these talks, diplomats and negotiators “will go home with a sense that it is coming”, he told reporters.

The maps presented on Wednesday and now locked in a UN vault will form the basis for future discussions on boundaries dividing zones in a federal Cyprus.

For more than 40 years, the island of Cyprus has been divided – the majority Greek Cypriots to the south, the minority Turkish Cypriots to the north – and all attempts to reunite the former British colony have failed.

But after 20 months of negotiations, there is some hope now that a deal might just be possible, to create a single federation with power and land shared between the two communities.

For the first time, the British foreign secretary will sit down with his Greek and Turkish counterparts and the leaders of both communities to discuss the key issue of how their security can be guaranteed

The north wants Turkish troops to stay on the island, the south says their presence is unacceptable in an EU member state. So the hurdles remain high. But the UN says these talks are the best chance for peace.

If a deal is agreed it could be put to both communities in separate referendums this year.

Mr Johnson said a solution was in reach if all sides were ready to be flexible.

He will be joined by Mevlut Cavusoglu of Turkey and Nikos Kotzias of Greece.

Property: Top of the agenda at Monday’s talks was what should happen to the properties that Greek Cypriots had to abandon in 1974. Should they get the right to take their old homes back, or be compensated – and if so by how much?

Security: How can the security of the Turkish Cypriots be guaranteed if Turkey’s estimated 30,000 troops leave? Greek Cypriots see them as an occupying force, so should some stay or should Turkey retain the right to intervene?

Who would act as a guarantor of the deal? The EU, of which Cyprus is already a member, or the UK, which has two military bases on the island?

Power and the role of the EU: There is talk of a rotating presidency, but how would that work? And could a Turkish Cypriot president really represent the country from time-to-time at EU summits?

Territory: How much more territory should Greek Cypriots gain to reflect the fact that they make up the majority of the island’s population? UN peacekeeping forces estimate that 165,000 Greek Cypriots fled or were expelled from the north, and 45,000 Turkish Cypriots from the south, although the parties to the conflict say the figures are higher.