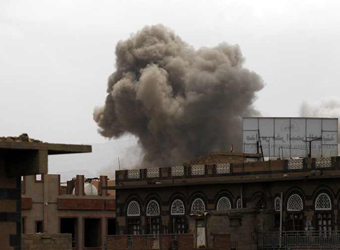 Eight women and a child have reportedly been killed in an overnight air raid on a funeral reception near Yemen’s rebel-held capital, Sanaa.

A Houthi rebel spokesman said the strike was followed by a second which hit emergency responders in Arhab, 40km (25 miles) from Sanaa.

The rebels blamed a U.S. and Saudi-backed coalition for the bloodshed, who are yet to comment.

The coalition has been fighting the Houthis and forces loyal to a former Yemeni president, Ali Abdullah Saleh, since March 2015.

Its aim is to restore the internationally recognised government of President Abdrabbuh Mansour Hadi.

Abdel-Rahman al-Ahnomi, a spokesman for the Houthis, said the twin strikes killed and wounded dozens of people.

However, other reports from the scene said there was only one air strike. Conflicting reports are common in the chaos following air raids in Yemen.

Yemen’s war has killed more than 10,000 civilians and displaced more than three million people since 2015.

The conflict and a blockade imposed by the Saudi-led coalition have also triggered a humanitarian disaster, leaving 80 percent of the population in need of aid.

Doctors without Borders warned this week of a worsening situation in the city of Taiz, where hospitals have been repeatedly attacked and where 200,000 people face food, water, and medicine shortages.

The US was criticised last month over a raid on a village in central Yemen, in which a number of civilians died – many of them children.

Its target was the house of a suspected leader of al-Qaeda in the Arabian Peninsula (AQAP).

U.S. media now report that the dead included a tribal leader allied to the internationally-backed president.

A U.S. Navy Seal was also killed in the attack, and six American soldiers were wounded.