E-Commerce Services are Used by 22.4% of Internet Users in Egypt 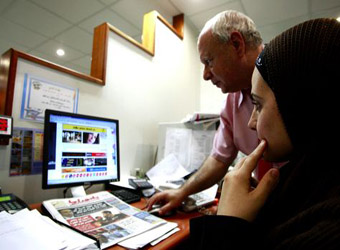 A new Arab Advisors Group survey of Egypt’s Internet users revealed that around 22.4% of Internet users in the country use e-commerce services to buy products or services or pay their bills online in February 2012..

Electronics are the most popular products bought online, followed by software, while airline tickets booking and website subscriptions are the top services paid for online.

The survey revealed that around 22.4% of Internet users in Egypt use e-commerce services to buy products or services or pay their bills online.

The Arab Advisors Group conservatively estimates the number of these users to be around 2.8 million, which is around 3.4% of the total population in Egypt.

The survey report, “Egypt Internet users and e-commerce survey 2012” was released on March 26, 2012 and provides the results of a major comprehensive online survey of Internet users in Egypt.

The survey probed the patterns and trends of Internet use in Egypt including online and video gaming, mobile Internet, e-commerce, online banking (e-banking) and e-government.

Respondents were randomly targeted by receiving an email shot in their inbox in cooperation with Egypt’s major ISP, TE Data, as Zawya stated.

The survey was conducted on the general Internet population, including both genders and all age groups across Egypt. The online survey yields a confidence level of 99% with a margin of error of less than 5%.