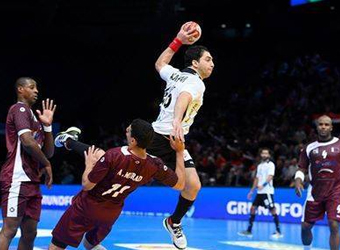 Egypt opened their World Handball Championship campaign with a 22-20 win over 2015 World runners-up Qatar in a tough Group D clash on Friday in Paris.

Ahly keeper Karim Hendawi gave Egypt the upper hand with some superb saves during the first half, which ended with an 11-8 lead for the Pharaohs.

In the second half, Egypt managed to keep the pressure on their opponents as they maintained their lead till the end of the game.

The first four teams in each group will advance to the knockout round.

Egypt reached the round of 16 two years ago, before eventually losing to powerhouses Germany. They have not qualified for the last eight since finishing fourth at the 2001 edition in France for their best ever position.

The Egyptians have prepared well for the World Championship, camping at home before heading to Europe for two other camps in Lithuania and Denmark.

They take on Denmark on January 14 before facing Bahrain two days later.