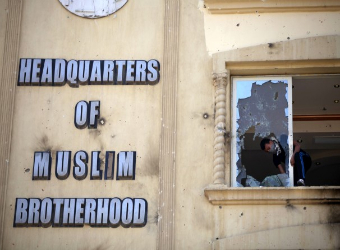 The Muslim Brotherhood has seen worse. During the 1950s and ‘60s Egyptian courts sentenced thousands of Brothers to brutal prison camps and a dozen to hang. For most of the time since its founding in 1928 the group was formally outlawed. Yet never has the secretive and highly disciplined organisation seen its fortunes fall so swiftly as now.

Less than three months ago a Brotherhood stalwart, Mohamed Morsi, was Egypt’s president, and his party Egypt’s strongest. Now Mr Morsi languishes in jail awaiting trial, along with most of the Brotherhood’s first- and second-tier leadership and perhaps 2,000 more fellow Islamists—close to the number of Egyptians, many of them Brothers, killed in the violent unrest that followed Mr Morsi’s ousting in July.

On September 23rd an Egyptian court again outlawed all activities by the group, ordering the state to seize its property and financial assets. An outright ban is likely to follow in another court ruling, expected soon. The new, army-installed government’s purge of Brothers has extended from the eviction of ministers appointed by Mr Morsi down to teaching posts at state universities, such as the professorship in veterinary medicine held by the group’s supreme guide, Mohamed Badia.

But if state repression is nothing new, the Brothers are being challenged as never before by the strength of feeling against them expressed by a broad swath of Egyptians. This has been fanned by a wave of near-hysterical denigration in the press, where few voices now dare to suggest even mild sympathy for the deposed Islamists. The Brotherhood is gleefully blamed for every ill and lumped with more extreme Islamist groups, such as those fighting an armed insurgency in the borderlands of the Sinai peninsula, or those responsible for a car-bomb assassination attempt against Egypt’s interior minister on September 5th.

Public hostility, accompanied by cheerleading for Egypt’s army and police, has left the Brothers hard pressed to respond. Since the violent crushing of a pro-Morsi sit-in last month his supporters have tried to adjust their message. They no longer use the unpopular former president as a symbol and have stopped demanding his return to office. Their small but persistent demonstrations now chant not about “Islamising” Egypt, but more generally against tyranny and in defence of the democratic ideals of Egypt’s January 2011 revolution.

The Brothers are not alone in feeling betrayed. Many non-Islamist supporters of change fear that the revolutionary pendulum has swung back with excessive vengeance. The reimposition of emergency laws made notorious during the 30-year rule of Hosni Mubarak, the release of the fallen dictator and his cronies from prison, and the demonization of political opponents as enemies of the state all smack to them of a counterrevolution by Egypt’s “deep state”, the powerful security, intelligence and judicial apparatus that grew up under Mr Mubarak.

A surge of xenophobia has seen Egypt flip abruptly from a haven where 300,000 Syrians fled from civil war, to a place where many refugees now fear to venture into the street for fear of arrest or deportation. On September 19th the Egyptian coast guard, attempting to disable a fishing vessel crammed with Syrian and Palestinian families trying to escape to Europe, shot dead two refugees. Government-owned media outlets, citing security officials, now speak ominously of the need to crack down on a purported fifth column of activists, including human-rights organisations, pursuing a devious foreign agenda.

With most of Egypt’s non-Islamist parties expressing unquestioning support for the new, military-backed order, former revolutionaries feel increasingly alienated. On September 23rd, scores of youthful activists, many of whom were prominent in the Tahrir Square demonstrations that toppled Mr Mubarak, announced the formation of a new organisation. Rather than a political party, the Revolutionary Path Front is intended to act as a broad-based pressure group to lobby for the original goals of the 2011 uprising, such as securing civic freedoms and expanding social justice.

Despite the Brotherhood’s softened tone, shared fears of counterrevolution have not redounded to its benefit. Mr Morsi’s year in office exposed a penchant for monopolising power that disturbed fellow Islamists as well as secular Egyptians. Two of the country’s main Salafist parties, who represent puritan religious trends but lack the Brothers’ cult-like structure, now openly advise the Brothers to apologise for past mistakes, and to call off a campaign of civil disobedience that does more to annoy the public than to attract sympathy. Egypt’s most prominent pro-Islamist columnist, Fahmy Huwaydi, counselled that the Brotherhood should follow the example of Iran’s Ayatollah Ruhollah Khomeini, the founder of the Islamic Republic who after years of obstinacy ended the 1980-88 Iran-Iraq war with the declaration that to drink a cup of poison was better than to prolong the suffering.

The fact is that, in another relapse to pre-2011 revolution ways, most Egyptians appear again to have disengaged from politics. This is largely due to exhaustion, but also to hopes that perhaps the current government, with its control of the state far more secure than Mr Morsi’s, may be able to address pressing problems. These are many and deeper than ever, but the government, bolstered by a massive injection of funds from wealthy Gulf supporters such as Kuwait, Saudi Arabia and the United Arab Emirates, has made some promising starts, including an initial $3.5 billion stimulus package of infrastructure spending. A recent directive from the prime minister, asking television stations to change the tagline on national news reports from “war against terror” to “the road to democracy”, suggests that Egypt’s leaders are keen to move on.