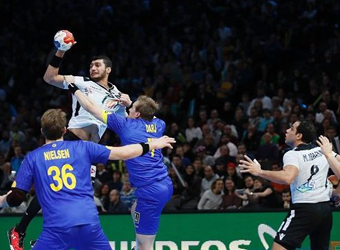 Egypt finished third in their group after losing 33-26 to Sweden in their final group stage match of the 2017 IHF World Men’s Handball Championship.

Sweden ended the first half with a 15-9 lead. The Swedish team led by as many as 12 points in the second half before the Pharaohs managed to cut the deficit to seven points by the end of the game.

This marked Egypt’s second defeat in the tournament as they had earlier lost against Denmark but claimed three victories over Bahrain, Qatar and Argentina. Egypt, Qatar, Denmark and Sweden had all secured their spots in the knockout stage.

The Pharaohs sit third in Group D on six points, two behind Sweden and Denmark, but the latter have a game in hand against fourth-placed Qatar.

Egypt will now face Croatia, who finished second in Group C after losing to leaders Germany, in the round of 16 on Jan. 22. The Pharaohs were eliminated in the same stage in the 2015 tournament after losing 23-16 against Germany.