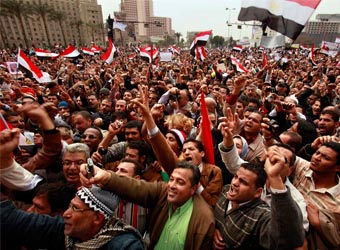 An Egyptian court acquitted six police officers Saturday on charges of killing 83 protesters during the country’s 2011 revolution, the latest in a string of trials that rights group say failed to hold the country’s security forces accountable for demonstrators’ deaths.

The acquittals come as ousted Islamist President Mohamed Morsi, toppled in July by the military, faces a host of criminal charges. Morsi appeared in court Saturday in a case that charges him and 130 others over prison breaks that freed some 20,000 inmates during the 18-day revolt in 2011 that toppled autocrat Hosni Mubarak.

The police officers’ case involved the killing of protesters in the Mediterranean city of Alexandria and included the former head of security and of the riot police. Prosecutors alleged that commanders armed police with live ammunition and allowed officers to shoot at protesters in front of police stations from nearby rooftops.

Lawyers for the officers denied that they were responsible for the killings. During a Jan. 19 hearing, lawyers referred to Morsi’s Muslim Brotherhood group as the “real killers” of the protesters, the state-run daily newspaper Al-Ahram reported.

Given the chaos surrounding the uprising, legal experts say it is difficult to hold any individual legally responsible for a specific killing. However, not one of the police officers charged with killing protesters in 2011 are behind bars, leading rights groups to accuse Egypt’s judiciary of protecting security forces at the expense of justice.

“The consecutive regimes did not have the political will to hold the criminals accountable, allowing them to go away with it,” said rights lawyer Ahmed Ezzat, who works with the prominent Freedom of Though and Expression group. “These acquittals strengthen (Mubarak’s) position. … Now we have the interim authorities putting it all again on Morsi.”

Police brutality during Mubarak’s 29 years in office was a key cause of the 2011 uprising. However, the army and Morsi failed to reform the force. Since Morsi’s ouster July 3, thousands have been killed and injured in heavy security force crackdowns on Morsi’s supporters.

“Policemen who are acquitted come out of detention fiercer,” Ezzat said. “They will kill more protesters.”

Lawyers for the police officers charged could not immediately be reached for comment Saturday.

Morsi appeared Saturday in a Cairo courtroom with 19 others over the jail break charges. Some 130 people — including militants from the Palestinian Hamas group and the Lebanese militant group Hezbollah — are charged in the case, with many being tried in absentia. Morsi himself was freed in a prison break that accompanied the turmoil of Egypt’s 2011 revolution before becoming the nation’s first freely elected president a year later.

The court adjourned that case to Monday after lawyers requested the case be transferred to a panel of different judges. In previous court appearances, Morsi, who faces a raft of criminal cases, has maintained his innocence and said that he remains Egypt’s legitimate ruler. His Muslim Brotherhood has been designated as a terrorist group by Egypt’s military-backed interim government and thousands of its members and its leaders have been arrested in a crackdown since Morsi’s overthrow.