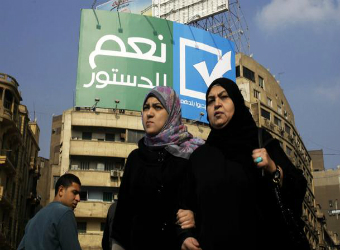 Voting resumed across Egypt Wednesday in a referendum on a new constitution, with the turnout expected to hold the key to army chief General Abdel Fattah al-Sisi’s likely presidential bid according to AFP.

Polls opened on the second and final day of the vote at 0700 GMT.

The constitution is expected to be approved despite a boycott by Islamist supporters of ousted president Mohamed Morsi.

The new constitution replaces the one drafted under Morsi, which was passed with a 64 percent of the vote, but on a turnout of barely 33 percent of the country’s 53 million voters.

Polling went off smoothly at most stations on Tuesday, but according to latest reports nine people were killed in clashes outside Cairo between Morsi supporters and police and anti-Morsi groups.

Around 250 people were also arrested including some Brotherhood members for disrupting the polling in some areas.

Tuesday’s violence highlighted the government’s precarious grip on the most populous Arab nation, still reeling from Morsi’s ouster and a crackdown on his supporters.

More than 1,000 people have been killed in clashes since Morsi’s ouster, and thousands have been arrested including the top leadership of the Muslim Brotherhood to which the ousted leader belongs.

US State Department deputy spokeswoman Marie Harf, meanwhile, said that the United States was concerned by reports of violence during the vote but added that it was awaiting the reports of “independent observers on the technical merits of the ongoing referendum”.

She also said that a clause in a Congress bill expected to pass on Friday allows the White House to unfreeze $1.5 billion in aid to Cairo if it can certify that Egypt “has held a constitutional referendum, and is taking steps to support a democratic transition”.

Egyptian media came out in praise of Tuesday’s first day of polling.

“Yes, even if criminals hate it,” said a front page headline in Al-Waft, a private daily, referring to supporters of Morsi. “Egyptians choose their future as millions write history,” said state-owned daily Al-Gomhuria.

The Egyptian government hopes a large turnout in favour of the new constitution will bolster its disputed authority, while Sisi will monitor it for an “indicator” of his popularity, an official close to the general said.

Interim president Adly Mansour’s government has pledged the referendum will be followed by parliamentary and presidential elections.

It is unclear how many Egyptians will have turned out to vote by the end of Wednesday, but the constitution appears certain to pass.

Backers of the constitution are hoping it will receive the support of at least 70 percent of votes cast.

The authorities are worried a low turnout would empower their Islamist opponents and cast further doubts on their legitimacy, analysts say.

Security forces deployed across the country amid fears that recent attacks by militants would deter voters.

Many Islamists revile Sisi as the man who overthrew the country’s first freely elected and civilian president, but the general is adored by millions who took to the streets to demand Morsi’s resignation.

He is widely expected to run for president, and has said he would stand if there was “popular demand”, state media reported this week.

The charter has done away with much of the Islamist-inspired wording of Morsi’s constitution, suspended on his overthrow, and its supporters say it expands women’s rights and freedom of speech.

But it has bolstered the military’s powers, granting the army the right to appoint the defence minister for the next eight years and to try civilians for attacks on the armed forces.