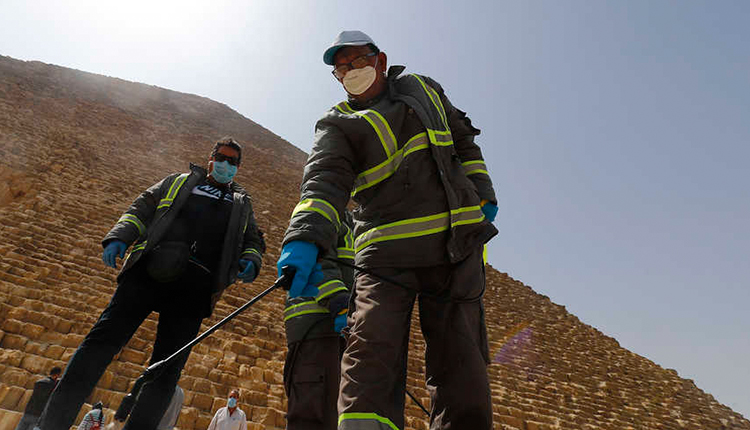 Egypt did not reach the peak in coronavirus infection curve and did not need to use its full medical capacity as the critical sixth week of the outbreak ended, Health Minister Hala Zayed said on Daturday.

Friday was the last day of Egypt’s sixth week in the coronavirus outbreak which, according to the World Health Organisation (WHO), was the most critical for many countries, Zayed told MBC Masr satellite Channel over the phone.

Until Friday, 536 cases and 30 deaths were recorded in Egypt since the first case was confirmed on 14 February, according to Ahram Online.

“More than 70 percent of the cases detected lately were contacts of previous cases. Other cases tested positive after arriving from abroad and being in home isolation,” Zayed said.

“With 30 deaths, the fatality rate is 5.5 percent… 11 patients had died before reaching isolation hospitals.”

Zayed asserted that half of the infected cases who died outside isolation hospitals were either in private hospitals and were not properly diagnosed, or were brought in too late and died before the test results appeared.

The Egyptian minister added the World Health Organization (WHO) said in case a country doesn’t follow preventive measures, the peak may be reached by the sixth or seventh week.

“This is the last day of the sixth week since the virus was detected in Egypt, the seventh starts on Saturday. The outbreak in China, Japan, and Singapore took place in tandem, but it was only the former that witnessed a peak.”

According to the health minister, Egypt’s curve and trends are similar to those of Japan and Singapore.
On the country’s preparations to confront the virus, the minister said that fever hospitals and central labs are the “access points” for coronavirus cases.

“To facilitate the procedures we have increased test laboratories from one central lab in Cairo to 23, and will encompass all the 27 health directorates by mid-week.

Zayed said that Egypt has a sufficient number of IC beds and ventilators and is being supplied with more.

“For phase two of the pandemic, which we are in, we have planned to work in 27 hospitals in 27 governorates. However, so far we only needed six hospitals with an occupancy rate that doesn’t exceed 50 to 60 percent.

“Only five to 10 percent of the cases need ventilators. Countries face a crisis in ventilators if they encounter a sudden outbreak.”

On the availability of PCR tests, Zayed stressed that tests should only be performed on contacts of positive cases and people who have returned from countries that have an outbreak, according to “epidemiology rules.”

She added that Egypt’s 536 cases were detected after 20,000 people were tested.

Walking is the best thing for health amid coronavirus