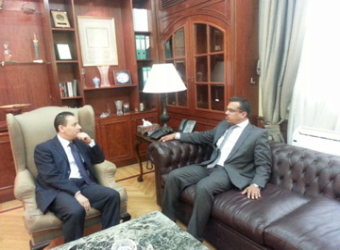 Egyptian Exchange Chairman Dr. Mohamed Omran, met with Singapore Ambassador in Egypt, H.E Premjith Sadasivan, in EGX historical headquarters in Downtown, discussing ways to enhance cooperation between the two countries at the level of the capital markets, either through technical or academic cooperation.

The ambassador pointed out that Singapore’s financial sector is one of the most important economic sectors in Singapore which is classified as the fourth most important financial centre in the world. And according to the World Economic Forum report Singapore’s economy is classified as the second- best competitive economy  in the world and the first Asian one for the year 2011-2012.

Dr. Omran welcomed the increased cooperation with Singapore Stock Exchange as per its international experience and ability to attract investors from all over the world.

EGX’s chairman pointed out that the meeting suggested to organize a day for the Egyptian capital market in Singapore.

Annual Conference for ACH Service Kicks off Today in Cairo