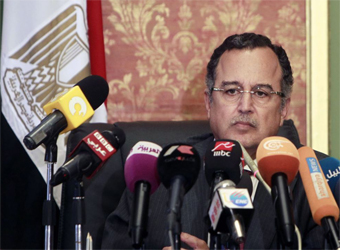 Egypt’s foreign ministry said it summoned Qatar’s ambassador on Saturday in protest at Doha’s criticism of the military-installed government’s crackdown on the Muslim Brotherhood.

In a statement earlier on Saturday, Qatar had referred that the recent decision to designate the Muslim Brotherhood a terrorist group was “a prelude to a shoot-to-kill policy” against demonstrators.

A Qatari Foreign Ministry statement said: “The decision to designate popular political movements as terrorist organizations, and labeling peaceful demonstrations as terrorism, did not succeed in stopping the peaceful protests.”

“It was only a prelude to a shoot-to-kill policy on demonstrators,” the statement published by state news agency QNA said. It said that “inclusive dialogue” between all sides was the only solution to Egypt’s crisis.

On the other hand, Egypt accuses Qatar and its Doha-based Al Jazeera television channel of backing the Muslim Brotherhood, which it declared a terrorist organization on Dec. 25. Last week, Egypt’s general prosecutor detained several journalists for 15 days for broadcasting graphics on Al Jazeera, alleging that they damaged Egypt’s reputation.

Relations between the two countries have deteriorated in the wake of the Egyptian military’s overthrow of president Mohamed Morsi and a deadly crackdown on his Muslim Brotherhood movement, which Qatar backs.