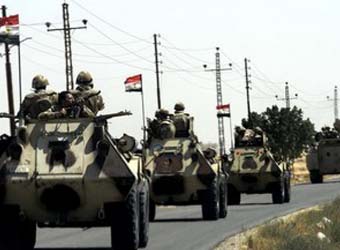 “The raids on caves in Halal Mountain resulted in the destruction of 33 workshops for manufacturing Improvised Explosives Devices,” an army spokesman said on Facebook.

“The raids also resulted in the confiscation of 66 motorbikes and two off-road vehicles,” he added.

On Sunday, Prime Minister Sherif Ismail issued a decree banning motorcycles in central and North Sinai for one year.

Egypt’s army and police forces have been waging a war over the past three years against an Islamist militant insurgency in North Sinai. Hundreds of security personnel and militants have been killed in the violence.

Two days ago, three army soldiers were killed and four others injured in an explosion in the Halal Mountain area.

In late January, Egypt’s army said it killed six terrorists and arrested another in central Sinai.

In October 2014, President Abdel Fattah al-Sisi issued a decree declaring a state of emergency in parts of North Sinai, which has since been renewed periodically.