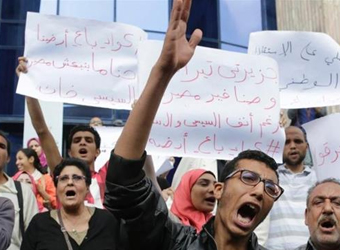 Security forces dispersed on Monday afternoon a protest in Cairo against the approval of the Egypt-Saudi Arabian demarcation deal by the Egyptian cabinet last week.

Dozens of protestors initially gathered outside the Journalists Syndicate in downtown Cairo to start a march to the parliament, though an eyewitness told Ahram Online that security forces blocked off the road to the syndicate.

The protestors were forced to move to two spots outside the cordons — at the Al Amercaine cafe on the corner of Talaat Harb and 26th of July Street, and behind the police cordon in Abdel-Khalek Tharwat street, where the syndicate is located, according to the eyewitness.

A group called Ardy (My Land) called earlier on a Facebook event for the march on Monday from the Journalists Syndicate to the parliament to reject the agreement’s approval and referral to parliament.

“This agreement no longer exists after it was voided by the administrative judiciary, but the government insists to implement it and deliver the islands to Saudi Arabia, against the popular will,” the Facebook event read.

The event further called on Egyptians to join them to defend Egyptian lands and “put the regime on trial.”

The eyewitness told Ahram Online that the police arrested a number of protesters. However, the exact number of those arrested and their place of custody is not yet known.

Random arrests and harassment by civilians against the protestors in the area were also reported.

Later the protesters in both places were cordoned off, tear gassed, and a number were taken to police cars.

Khaled El-Balshy, the head of the syndicate’s Freedoms Committee, told Ahram Online that “no journalists were arrested to my knowledge, while a number of protesters remained inside the union’s headquarters as tough security siege are preventing them from leaving.”

Egypt’s cabinet referred last Thursday the border demarcation agreement to parliament after approving the deal that places the Egyptian-controlled Red Sea islands of Tiran and Sanafir under Saudi Arabian sovereignty.

The cabinet asserted in a statement that its approval of the deal and its referral to parliament is constitutional.

Though lawyers challenging the agreement in court say the move is unconstitutional, as the court has not yet given a final verdict on the issue.

Lawyer Khaled Ali, who is challenging the deal in court, told Ahram Online earlier that the cabinet’s decision is neither legal nor constitutional.

On Saturday, Ali filed another case against the Egyptian president, prime minister, the head of the parliament, along with interior and foreign affairs ministers for approving the agreement and sending it to the parliament, according to a post on his Facebook page.

In June, an administrative court voided the agreement after a number of citizens and lawyers filed a lawsuit challenging the deal.

The High Administrative Court is set to issue a final verdict on the deal on 16 January.