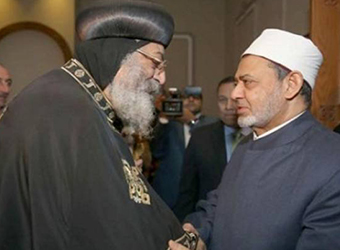 The Grand Imam of Egypt’s Al-Azhar Ahmed El-Tayyeb and Pope Tawadros II, the head of Egypt’s Orthodox Church, stressed the importance of reviving values and ethics as an imminent necessity to maintain national unity and preserve the community’s social fabric.

On Tuesday, Egypt’s religious leadership attended the opening session of the ethics and values initiative, which comes in light of consecutive calls by Egypt’ s President Abdel Fattah al-Sisi to purge extremist ideas from religious discourse.

Grand Imam Ahmed El-Tayyeb said that Egypt’s youth belong to a civilization that is deeply rooted in human history.

El-Tayyeb also urged the leadership entitled with the country’s educational and cultural process not to ignore the heritage of Egypt’s youth or assume that it has faded away or that there is no chance of it being restored.

“This cultural heritage can be revived at anytime if called upon by those responsible, under the condition that all cooperate, each in his field, to provide the suitable atmosphere and conditions to revive the role of the youth,” El-Tayeb said.

For his part, Pope Tawadros demanded that educational faculties be given more attention, as they are entitled with upbringing the nation’s youth since childhood.

He called on the respective figures among Egyptian society, starting from the families’ mothers and fathers, to carry this out.

Tawadros highlighted the role of the family as the cornerstone of society, expressing hope that the initiative would provide a practical vision to revive morals and principles within Egypt.

The pope suggested that entrance to educational faculties should not be limited to the Egyptian schools’ score system and that people be allowed to join by personal preference, calling on faculties to expand their role.