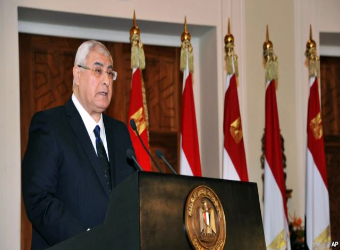 A new law governing Egypt’s upcoming presidential elections has been revised and was sent on Monday to interim President Adly Mansour for a final review.

The State Council, a judicial advisory body, had been given the 59-article law and asked to review a variety of proposed amendments after Mansour put the document up for public debate and began fielding suggestions.

Mansour had previously announced that the law would be issued by 18 Februrary.

According to Judge Magdy El-Agaty, vice president of the State Council and head of the council’s legislation department tasked with the law’s revision, there were no differences in opinion between his department and the presidency.

A particularly contentious aspect of the law concerned an article allowing politicians and citizens to file appeals against the election’s official results as announced by the High Presidential Elections Commission (HPEC).

Supporters of the article said it was more democratic, while those against it insisted that appeals would bog down the electoral process and cause considerable delays, among other reasons.

El-Agaty said that the council’s legislation department has decided to allow the appeals, which will be filed through the Supreme Administrative Court.

The legislation department also kept an article detailing the parameters a presidential candidate must fulfill, namely in terms of citizenship and education.

According to the law, a presidential candidate must have a university degree.

Tony Blair Arrives in Cairo for Second Visit in 2014