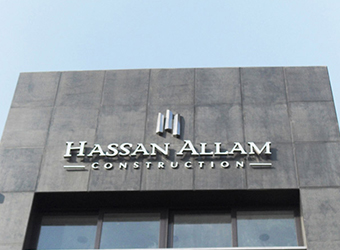 Egypt’s Hassan Allam has signed contracts of 850 million Egyptian pounds ($46.9 million) for infrastructure and state social housing projects during the period from December 2016 until June 2017.

Atef Barbary, Hassan Allam’s Managing Director for Financial Affairs, said Monday that his company achieved an increase worth 66 million pounds in the volume of contracts during six months.

About Hassan Allam’s other projects, Barbary added that the construction firm was tasked with executing a giant bundle of infrastructure projects, notably the utlisation works of the first phase in the country’s new capital city.

Hassan Allam was also assigned with carrying out additional works, including two drinking water plants as well as a number of residential projects which are implemented in favour of other real estate development firms, Barbary further stated.

“We target expanding our businesses in the local market and compete for mega projects as well as launching three new flagships in real estate investment field with cost of 1.5 billion pounds,” Barbary noted.

Moreover, the Egyptian official referred that Hassan Allam’s total business volume will reach 2.5 billion pounds at the end of June.

“We were recently charged with executing two projects for administrative facilities at the ministerial district in the new capital city, at a cost worth 1.3 billion pounds,” Barbary concluded.