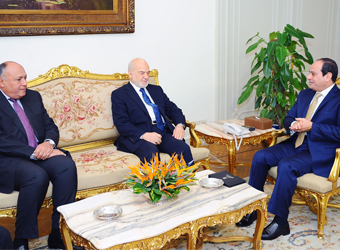 Egypt’s President Abdel-Fattah El-Sisi met on Wednesday with Iraq’s foreign minister Ibrahim El-Jaafari in Cairo where they discussed the latest developments in Iraq, the Egyptian presidency said in a statement.

El-Jaafari informed El-Sisi of the latest efforts by Iraqi forces in fighting terrorism and recapturing the city of Mosul from militant forces.

The Iraqi FM also expressed his appreciation for Egypt’s efforts in the region.

El-Sisi assured the Iraqi official that Egypt is resolute in its support of the Iraqi state, its sovereignty over all Iraqi territories and its efforts to restore security and stability in the country.

President El-Sisi also stressed Egypt’s rejection of any external interference in Iraqi affairs and attempts to divide the Iraqi people.

The Egyptian leader also praised the efforts of the Iraqi government in fighting terrorism as well as the successful recapturing of Mosul.