El Diwany: Turkey And Iran To Compete U.S. And Europe Investments In Egypt 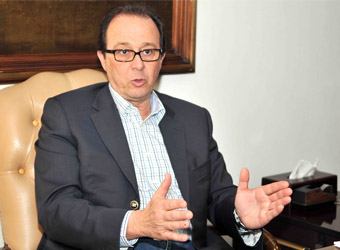 Dr. Sherif El Diwany, the Head of Middle East at Davos World Economic Forum, confirmed that Egypt’s economic allies remain without any change in the names, but the change will be in their rankings, as if the United States tops the ranking list of Egypt’s allies in terms of investment, and the EU in terms of trade, a radical change is expected to take place on the map of Egypt’s allies amid the next three years.

El Diwany clarified during his interview with Amwal Al Ghad, that both Turkey and Iran will be competing the U.S. on the Egyptian investment battlefield, as the U.S. considered the major investor in Egypt, however the EU remains as the biggest trading partner of Egypt, followed by the U.S, and the UAE, and finally the KSA, which comes in the end of the list, in terms of investment and trade, due to some political considerations that may be linked to the former president.

El Diwany said the consideration of Saudi Arabia as the leader of Arab world was ended by the revolutions of Arab Spring, and he assured that Egypt will restore its leading role in Arab region, because it is the only pivotal state in the region, after the fall of the former regime while played the role of subordinate not the director.

He added that falling of the “elite” group after the revolution has resulted in an economic emptiness, as well as withdrawing the economic credibility of Egypt relatively, and he mentioned an agreement proposed in the forum to venerate the revolutionaries in 2014.

El Diwany said also that he expects a wave of global acquisitions of the Egyptian companies within the upcoming 3 years, whether by the main allies, or other allies, and these acquisitions are strongly assumed to take place by the election of the new president.

How do you see the economic allies’ vision of Egypt a year after the revolution, and the future of their relations with Egypt?

The map of Egypt’s allies after the revolution witnesses a radical change, especially after the NGO case that vibrated relations between Cairo and Washington, which were stable for at least 2 decades.

So the allies will still constant, but with a change in their order of importance, and the change is strongly connected with the election of the new president.

How do you consider changing the allies’ policies?

Firstly we should admit Egypt’s fault of raiding the Non-government organizations, as our priority should have been about reconsidering the organizing law of these organizations’ affairs, instead of charging them.

And regarding the change in the policies of Egypt’s economic allies; I think that changing relates to the descriptive weight of every ally, as well as its partnership ranking and the example for this policies is the U.S. unexpected offering of new advantages for the Egyptian products.

Do the Egyptian-American arguments around NGO case impose any negative effects on the future of the two countries’ relations?

Certainly they will, as I see the whole fault relates to the Egyptian side, as a result of the absence of the clear regulatory laws for these organizations affairs.

So all of these laws should be revised and declared, and I think that charging the American side of intending to demolish the Egyptian entity, through operating and financing these organizations, is imprecise charging, because the conspiring party will not allow bringing its conspiracy to light in this easy way.

How foreign investors see the investment environment in Egypt?

Egypt’s governments have uselessly long sought to implement investment incentives in Egypt. In my opinion, Egypt’s legislative system shall be reformed by applying rule of law principle. Therefore, foreign investors will not fear from possible investments risks resulting from violation of rules. In addition, Egypt shall focus on developing human experiences in technology. Improving workers’ skills and qualifications is the only way to raise income rates in Egypt.

When can it be said that Egypt’s economy is able to grow?

Egypt’s economy will be recovered in July 2012. This will be after writing a new constitution and electing a president. After that, parliamentary councils will do its role and the political scene will be clear. Therefore, foreign investors could set their plans in accordance with the country’s regulations.

Will you accept any rule that will result from the presidential elections?

I will not accept but the civilian rule as it is the only way to boost growth rates and develop the community. If Egypt become under a non-civilian or a military regime, I will return to Switzerland.

How do you evaluate the economic thoughts adopted by political powers which have recently become members at Parliament?

I think that Islamists in Egypt adopt modern economic thoughts as Freedom and Justice Party, which scored a majority in the parliament, and Al-Nour party are supporting economic openness, besides being cautious about foreign borrowing and considering Egypt’s benefits in international transactions. I expect that Islamists will amend some agreements Egypt signed with other countries in a way that will benefit Egypt’s economy.

Do you expect a growth in Egypt’s foreign investments and foreign reserves in 2012?

I expect that Egypt’s economy will be slightly improved in 2012, while 2013 will witness huge economic reforms that will highly attract foreign investments and raise Egypt’s foreign reserves in 2014. Accordingly, economic development rates will be highly increased. Foreign investors will merge with Egyptian companies in 2013, the year which will witness the beginning of robust economic reform process.

What about the future of the Arab participation in Davos forum, which reached 10% in its last round?

Arab participation in Davos forum faced challenges from foreign and political and economic authorities. When I took over Middle East administration the number of Arab participants was only 45, so I used various means of pressure to boost this participation. And I succeeded in increasing the rate by 8%; 80 representatives of Arab Countries. This rate then boosted to 10%, as a result of considering, by the whole world, the region’s problems and the necessity of solving them such as the political problems of Palestinian case and the incidents in Iraq and Gulf countries as well as the oil future in the region. This consideration was a strong justification to fix the Arab participation in forum rate at 10%, although the decrease rate, less than 8%, of Arab region contribution in global economy. The investors and global economy organizers now deal with the region’s problems as a current status should be handled and accepted; which may lead to decrease the rate, in the near future, of Arab participation in forum.

Does this indicate the decrease in the weight of the Arab region in global economy?

Actually I think so since 8 years, due to the statistical state of economy and not opening to the global economy and keeping up the changes of external environment.

What about the Egyptian participation in forum?

In Davos forum, we will change the criterion of selecting Egypt representatives in forum; according to the social presence as well the media to affect the national economy in order to suit Egypt’s revolution and its great results.

Your speech indicates the decline of Egypt’s position in the region before the revolution.

Yes. We witnessed the decline of Egypt’s position in region during the period of former president, Hosni Mubarak. And Kingdom of Saudi Arabia was authorized to lead the region and handle its issues. This was a result of not considering the public interest and not dealing with the region’s issues, for the sake of random attempts which called deepening and supporting the relations between Egypt and any other country.

Does this estimate the inevitability of reforming the Egyptian strategy in openness to the world?

Yes, on the political and economic levels too.  I see that this reform appeared when Egypt started to regain its international position after the revolution, whereas leading the region by Saudi Arabia ended when the former regime was overthrown.