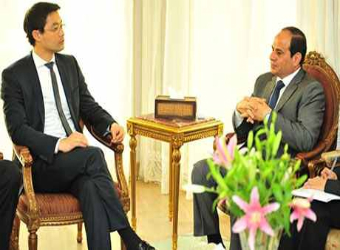 El-Sisi recently resigned from his posts as head of the military and defence minister to run in the country’s presidential polls on 26-27 May, which he is expected to easily win. He has promised to revive the country’s flagging economy and restore stability.

During El-Sisi’s meeting with the WEF’s Managing Director Philipp Rösler and his accompanying delegation in Cairo, the retired field marshal cautioned that religious extremism was endangering security and stability in Egypt and other Arab countries, according to an official statement by El-Sisi’s campaign team.

He urged international bodies to help combat the issue.

“The Middle East needs major support in the current time to withstand the consecutive blows it is being subjected to,” the statement quoted him as saying.

Egypt’s economy has been hit hard by years of political tumult since the 2011 uprising that toppled autocrat Hosni Mubarak. The unrest, coupled with a deadly Islamist insurgency unleashed following last year’s ouster of president Mohamed Morsi, has scared off foreign investors and tourists.

Rösler, who is also Germany’s former economic minister, said Egypt’s political and economic stability was “the centre of gravity” in the Middle East region. The German politician has invited El-Sisi for next year’s WEF in Davos, Switzerland.

El-Sisi on Sunday called for an “unprecedented turnout in the forthcoming presidential election” and blamed religious radicalism for crippling the country’s vital tourism industry, an important source of hard currency.

El-Sisi, who led Morsi’s ouster after mass protests against the Islamist president, said that restoring security depended on a boost in Egypt’s stagnant economy.

“The [country’s] economy is one of the most important obstacles facing society, and all other problems are related to it,” he said during a Sunday meeting with investors in the tourism industry, part of the build-up to his presidential bid.

El-Sisi has become a cult figure since he led Morsi’s ouster last summer. His electoral victory has been deemed a certainty, as many Egyptians view him as the only man capable of restoring stability following more than three years of political turmoil.

Despite riding on a wave of popularity among many Egyptians, his opponents, mostly in the Islamist camp, view him as the orchestrator of a bloody coup that toppled Egypt’s first democratically elected leader, Morsi.

He will compete for the country’s top post with only one rival – leftist politician Hamdeen Sabahi, who came third in the 2012 election that Morsi won.

About 50 Mummies Discovered in Egypt’s Valley of the Kings