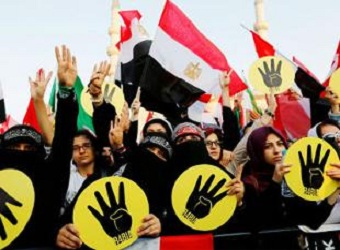 The National Alliance to Support Legitimacy has called for protests against the death sentences passed against 683 people in Minya on Monday.

In a statement, the main pro-Morsi alliance said the protests would begin on Wednesday from in front of the homes of some of those sentenced, Al-Ahram Arabic news website reported.

On Monday, a court in Minya passed death sentences on 683 supporters of former president Mohamed Morsi, including leading members of the Muslim Brotherhood.

The Islamist group’s Supreme Guide Mohamed Badie was among the defendants found guilty of attacking Adawa police station and killing a police officer, Mamdouh Kotb Mohamed Kotb, on 14 August 2013 — following the dispersal of pro-Morsi sit-ins at Rabaa and Nahda squares.

The verdicts must be ratified by the grand mufti before they can be carried out.

The court has set 21 June for the final verdict to be passed, after the grand mufti has made his assessment.

The same judge sentenced 529 supporters of the Muslim Brotherhood to death in March causing a public outcry locally and internationally.

On Monday, he confirmed 37 of the death sentences and commuted 492 others to life imprisonment upon the instructions of the grand mufti.