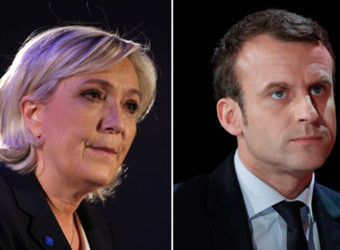 The two major contenders in the race to run France launched their presidential campaigns in the city of Lyon this weekend, both taking very different approaches in their attempts to appeal to voters.

Whereas Marine Le Pen, leader of the anti-immigration and populist National Front, stuck to her right-wing message, independent candidate and former Economy minister Emmanuel Macron tried to aim for as broad an appeal as possible in his first big campaign speech.

In front of more than 15,000 supporters, Macron used the old French motto “Liberté, Egalité, and Fraternité which means Liberty, Equality, and Fraternity respectively to develop his vision for the country.

In his 90-minute talk, in which he called for unity and open-mindedness, Macron warned against the risk of the French following the U.K. and U.S. becoming too isolationist.

Talking about the terrorist threat, Macron went on to pledge an increase in the country’s defense budget to two percent of France’s gross domestic product (GDP) and enhance co-operation within the European Union through, in particular, a partnership with Germany.

“We cannot praise the European project without offering at the same time a new vision for Europe”, he added.

In the north of Lyon, Marine Le Pen presented an opposite vision to Macron’s in her anti-immigration and anti-globalization speech.

But the main focus of her speech was immigration and the protection of French interests, two topics dear to the National Front.

Le Pen hardened her view on the former topic, cheered by militants screaming that this is our country.

She also criticised Europe’s free movement of labor and people, saying that their borders have been erased and their countries have become station concourses.

With Les Republicains’ candidate Francois Fillon embroiled in a financial scandal and struggling to stay in the race, Le Pen seized the opportunity to call on to the Fillon’s Christian supporters.

“We don’t want to live under the radical Islamism yoke, no Republican can accept that” she screamed at an electricfied crowd.”

While the two favorites in the presidential election held their rallies in Lyon, the Socialist party candidate Benoit Hamon received the party’s formal selection in Paris.

Hamon- who wants to implement a universal income, legalise cannabis and a robot tax- is currently running in fourth position in the race behind Le Pen, Macron, and Fillon but is gaining support in the latest poll conducted by Ifop, a polling firm.

The poll shows Le Pen with 25 percent, Macron 20.5 percent, Fillon 18.5 percent, and Hamon with 16.5 percent, while he was at 15 percent after the Socialist primary.

With less than 80 days before the first round of the elections at the end of April, the race is one of the most unpredictable in France and the weeks to come may bring some surprises, notably as the Republicains will have to decide on whether or not they stay with Fillon or choose another candidate.