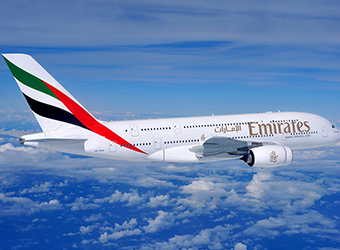 Emirates is already the world’s largest client for Boeing’s 777, with 165 jets and another 164 on firm order.

Sheikh Ahmed said the deal raises total outstanding orders from US aerospace giant Boeing, the global competitor of Europe’s Airbus Industries, to as high as $90 billion.

Delivery of the Dreamliners is scheduled to start in 2022, he said on the first day of the Dubai Airshow.

Emirates, the largest carrier in the Middle East, is also the world’s biggest client for Airbus 380 superjumbo jets with 100 planes. It has firm orders for another 46 jets.

“We have reached a conclusion that the Boeing 787-10 jets are the best choice for us,” Sheikh Ahmed said.

“Emirates’ orders today will be delivered from 2022, taking the airline well into the 2030s,” he said in a statement.

“Some of these will be replacements so that we maintain a young and efficient fleet, and others will power our future network growth.

“We see the 787 as a great complement to our 777 and A380 fleet, providing us with more flexibility to serve a range of destinations as we develop our global route network.”
Boeing welcomed the deal.

“We are excited that Emirates has selected the Boeing 787-10 Dreamliner to power its fleet expansion and future growth,” said Kevin McAllister, head of the company’s commercial aviation division.

“Emirates’ endorsement of the 787 Dreamliner extends our long-standing partnership and will sustain many jobs in the United States.”

Later, McAllister signed an agreement to sell Azerbaijan Airlines five Boeing 787-8 for a list price of around $1 billion. The carrier already has two 787-8 jets.

The announcement of the Boeing deal with Emirates came amid speculations the Dubai national carrier was also planning to announce another to buy more Airbus 380 superjumbo jets.

That deal may still ago ahead after the hammering out of final details, a source within the industry said.

On Thursday, Emirates said its half year net profit rebounded strongly from a slump last year due to cost saving measures and favourable exchange rates.

The airline posted a net profit of $452 million in the period from April to September, up 111 percent on the same period last year.

That was more than the $340 million net income for the whole of the last fiscal year to March 31.

The rise in earnings was driven by “capacity optimisation and efficiency initiatives across the company, steady business growth, and a more favourable foreign exchange situation compared to the same period last year,” the airline said.

Top Lebanese priest to travel to Saudi Arabia amid crisis

Arab League to meet on Iran next week at Saudi request: Diplomats