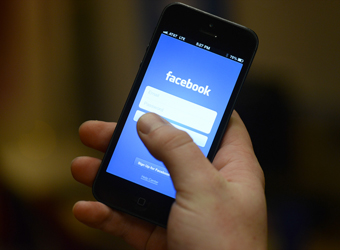 Facebook has a cash cow. It’s called News Feed, and for the past five years, it has been the company’s core money maker and source of revenue growth.

But there is a problem looming: Facebook has been saying for the past year that it is running out of places to put ads in News Feed. The company has determined that it can’t put more ads into users’ feeds without harming their experience. The industry term for this is ratio of ads to other content is called “ad load,” and Facebook says News Feed’s ad load is all maxed out.

Facebook says its revenue growth will slow down “meaningfully” this year as a result.

This doesn’t mean Facebook’s business won’t continue to grow. It added 76 million new users last quarter. That’s a lot of fresh eyeballs. But at 2 billion total users, Facebook can’t keep that pace forever, especially because 731 million of the world’s remaining 1.5 billion internet users who are noton Facebook are in China, where Facebook is blocked.

So if Facebook can’t show people more ads in News Feed, and can’t get unblocked in China, it needs to show them ads somewhere else. And that explains why, in the past six months, we’ve seen Facebook start to put ads in a lot more places.

It started selling ads inside Instagram Stories. It’s tough to tell how popular Stories have been on other Facebook platforms like Messenger, WhatsApp and Facebook itself, but presumably those Story ads will show up on other platforms, too.

It started selling ads inside Facebook Messenger, and was in Cannes to sell and educate ad buyers on Messenger ads just last month.

It started testing ads in Marketplace, its Craigslist-style shopping section for buying or selling used goods, yesterday. It’s just a test for now, but yet another place Facebook is hoping to find more ad inventory.

Facebook is hoping that at least one of these new formats can hit big.

Perfecting mid-roll video ads would be the best-case scenario, and would help Facebook finally cash in on advertisers’ massive TV ad budgets. Or at least that’s the hope.

WhatsApp, with 1.2 billion users, is also preparing for a business push, and recently brought Facebook exec Matt Idema over as COO to get its business ambitions moving.

But even if none of these new ad formats stick, Facebook already has another cash cow hiding in the background: Instagram.

Facebook doesn’t break out Instagram’s revenue, but analysts think it could be huge. Piper Jaffray believes Instagram did $2 billion in revenue in 2016, and that its revenue will grow to $22 billion by 2021. For comparison, Facebook did almost $27 billion in total ad revenue in 2016.

That means that Facebook’s next cash cow is already working. But it would be better to have two.

BMW 530i review: The best car I’ve ever driven