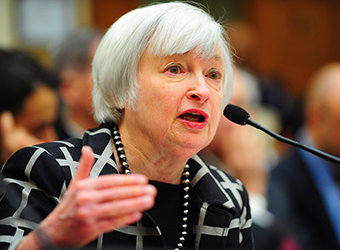 “I think we have a healthy economy now,” Yellen said at an event at the University of Michigan’s Ford School of Public Policy in Ann Arbor.

Unemployment, at 4.5 percent, is now a little bit below the jobless rate that most Fed officials think signals full employment, and inflation is reasonably close to the Fed’s two percent-goal, she said.

With the economy expected to continue to grow at a moderate pace, she said, the Fed is now shifting its focus.

“Whereas before we had our foot pressed down on the gas pedal trying to give the economy all the oomph we possibly could, now allowing the economy to kind of coast and remain on an even keel- to give it some gas but not so much that we are pressing down hard on the accelerator- that’s a better stance of monetary policy,” she said.

“We want to be ahead of the curve and not behind it,” she further noted.

In the U.S. Treasury bond market, yields were little changed after Yellen’s remarks.

The Fed raised rates in March for only the third time since the Great Recession, and most Fed officials expect the central bank to raise rates at least two more times this year.

Yellen’s comments largely echoed what she has said since then, and did not offer any new color on the timing of the rate hikes, or of the Fed’s eventual reduction of its $4.5 trillion balance sheet.

“We think a gradual path of increases in short-term interest rates can get us to where we need to be, but we don’t want to wait too long to have that happen,” she said.