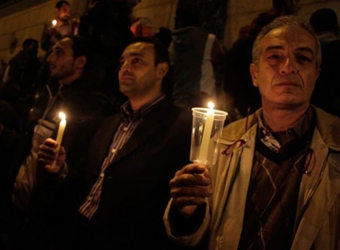 The funeral procession for the victims of Sunday’s bombing inside Cairo’s Coptic cathedral complex will be held on Monday at 11am at the Church of the Virgin Mary in Nasr City, followed by a state funeral at the Unknown Soldier Memorial, also in the Nasr City district.

Twenty-three people were killed and 49 injured after a bomb exploded inside a church attached to the Coptic cathedral in Cairo on Sunday, one of the deadliest attacks on Egyptian Christians in years.

Coptic Orthodox Pope Tawadros II will lead the funeral procession, which will only be attended by the victims’ relatives.

Following the attack, President El-Sisi announced that the country will observe three days of mourning.

Pope Tawadros II has cut short a papal visit to Greece and is on his way back to Cairo “to go directly to the site of the explosion.”

A number of countries including Russia, US, Germany and Saudi Arabia condemned the bomb attack.