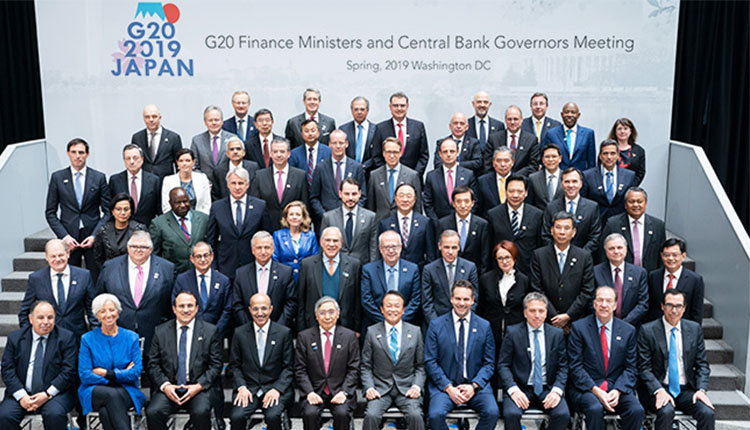 G20 sources say the Group of 20 finance leaders will say in an official communique from Japan that trade and geopolitical tensions have intensified.

After rocky negotiations that nearly aborted the issuance of a communique, the finance ministers and central bank governors gathered in Fukuoka, southern Japan, affirmed language on trade issued in Buenos Aires last December.

“Global growth appears to be stabilizing, and is generally projected to pick up moderately later this year and into 2020,” said the final draft, seen by Reuters.

“However, growth remains low and risks remain tilted to the downside. Most importantly, trade and geopolitical tensions have intensified. We will continue to address these risks, and stand ready to take further action,” the communique said.

The communique also said that G20 finance leaders had agreed to compile common rules by 2020 to close loopholes used by global tech giants such as Facebook and Google to reduce their corporate taxes.

The Buenos Aires G20 summit in December 2018 launched a five-month trade truce between the United States and China to allow for negotiations to end their deepening trade war. But those talks hit an impasse last month, prompting both sides to impose higher tariffs on each other’s goods as the conflict nears the end of its first year.

The G20 finance leaders’ final communique language excluded a proposed clause to “recognize the pressing need to resolve trade tensions” from a previous draft that was debated on Saturday.

The deletion, which G20 sources said came at the insistence of the United States, shows a desire by Washington to avoid encumbrances as it increases tariffs on Chinese goods. The statement also contains no admissions that the deepening U.S.-China trade conflict was hurting global growth.

U.S. Treasury Secretary Steven Mnuchin said on Saturday he did not see any impact on U.S. growth from the trade conflict, and that the government would take steps to protect consumers from higher tariffs.

The widening fallout from the U.S.-China trade war has tested the resolve of the group to show a united front as investors worry if policymakers can avert a global recession.

The bickering over trade language has dashed hopes of Japan, which chairs this year’s G20 meetings, to keep trade issues low on the list of agendas at the finance leaders’ meeting.

Mnuchin described the planned meeting as having parallels to the two presidents’ Dec. 1 meeting in Buenos Aires, when Trump was poised to hike tariffs on $200 billion worth of Chinese goods.

Trump took that step in May and will be ready to impose similar 25% tariffs on a remaining $300 billion list of Chinese goods around the time of the Osaka summit.

At the Buenos Aires meeting, the G20 leaders described international trade and investment as “important engines of growth, productivity, innovation, job creation and development. We recognize the contribution that the multilateral trading system has made to that end.”

The leaders in that communique called for reform of the World Trade Organization rules that were falling short of objectives with “room for improvement,” pledging to review progress at the Japan summit.

U.S. jobless rate remains at lowest level in 49Yrs in May